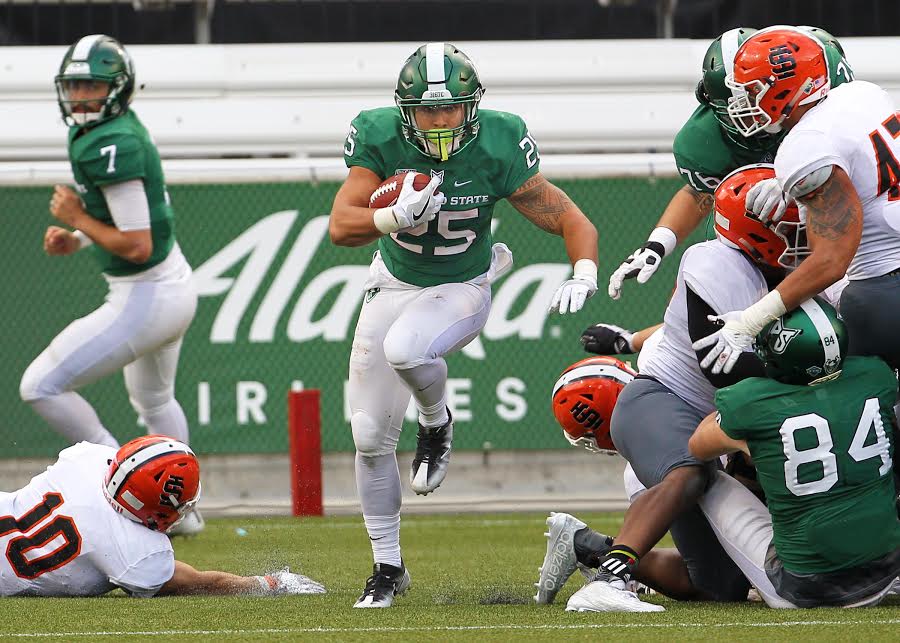 Despite finishing the day with zero passing yards, the Portland State Vikings celebrated its first conference win of the season against the Idaho State Bengals in dominating fashion with a score of 45–20. The Vikings used a strong rushing attack and vicious defense to come out on top.

Idaho State struck first on the scoreboard as running back Jakori Ford scored on a 2-yard touchdown run. PSU would quickly respond with a touchdown of its own as senior Paris Penn rushed to the end zone from 22 yards out to put the Vikings up 7–6.

“It all started with the O-line,” Penn said.

On the next offensive possession, senior quarterback Alex Kuresa scored on a 69-yard touchdown run. The momentum carried into the second quarter for the Vikings as running back Nate Tago got his share and began PSU’s first possession of the second quarter with a 72-yard touchdown run up the middle. The first half ended with the Vikings leading 31–6.

With PSU’s great offense came a great defense. The Vikings defense made it difficult for the Bengals to develop any life. Just as Idaho State had a little bit of hope approaching the red zone, cornerback Xavier Coleman intercepted a pass on the Vikings 1-yard line.

In the fourth quarter, Paris Penn scored on a 52-yard touchdown run for his fourth TD of the game. Bengals receiver, KW Williams scored two touchdowns to give Idaho State the fighting spirit. In the end, it wasn’t enough as the Vikings snapped its three game losing streak and won 45–20 at home.

The Vikings finished the game with a school record 531 rushing yards and zero passing yards.

“Our running game was strong, so we continued to run the ball,” Tago said.

Williams finished the day with 10 receptions, 101 yards and two touchdowns.

The Vikings go on the road and face Weber State in another Big Sky showdown at 6 p.m. Saturday, Oct. 8th in Ogden, Utah.