More people tune in for the NFL’s season-opening games than for the World Series. And it doesn’t take a bachelor’s degree to explain why that is. Compared to most things on TV, baseball is colorless and static. 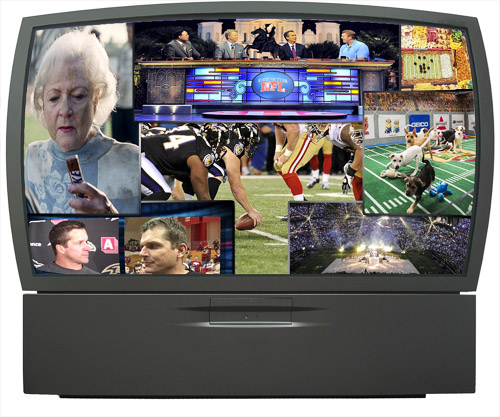 More people tune in for the NFL’s season-opening games than for the World Series. And it doesn’t take a bachelor’s degree to explain why that is. Compared to most things on TV, baseball is colorless and static.

In drab uniforms, players spend most of their time milling around, kicking dirt, their minds on something else, hoping the pitcher will take care of things.

Fans will tell you that meticulous strategy and intricate interpersonal nuance run deep under baseball’s surface tedium. It’s like a chess game, they say. Apparently everything, scrutinized closely enough, begins to look like a chess game and is therefore worth a second look. Nonetheless, the complex inner workings that only experts truly dig don’t make baseball any more telegenic. Like jazz music or Garrison Keillor (each a chess game in their own right), baseball belongs to the past and is better suited to radio.

More than 100 million people will watch Super Bowl XLVII this Sunday, but fewer than 13 million watched the last World Series. And if 20 years of downward-sloping Nielsen ratings is any indication, even fewer will bother with this year’s.

The starched and pressed World Series simply can’t hold a candle to the flashy, kinetic thrill of football’s nonstop violence: two hours of armored, machinelike creatures colliding head-on at speeds that only a wrecked car could empathize with.

And in a country that wants a fifth Die Hard movie, football was bound to smother baseball. It’s elementary. Football has more of what Americans want: commotion. Right? Maybe not.

A couple years ago, David Biderman of The Wall Street Journal reported that your average football game contains only about 11 minutes of actual play-time. If you add up only the time the ball is in play, snap to whistle, the Super Bowl offers less action than its halftime show.

If the game takes only 11 minutes to play but three hours to watch, then what else do we get for our time? There’s plenty of milling around in football, instant replays and footage of coaches on the sideline glaring in petulant fury. But mostly it’s advertisements. According to Biderman, commercials—added up—account for about one-third of a televised football game.

Our ferocious appetite for bruising competition did less to elevate football than our passion for window-shopping. Football seduces America’s inner Imelda Marcos more than it stokes our inner John McClane. This is, after all, a country in which it’s not unusual to abandon last year’s iPhone because Apple released a new model. Americans go deeper in debt to attain “studio quality” sound from headphones just because Dr. Dre says they should.

Because there is so little football in a football game, our love of the pastime can only be attributed in small part to the game itself. Our minds swell automatically with big screen thoughts of icy Budweisers, crispy Doritos, soda pop and lounging in sweats all day when we hear the warm, dumb-hearted tenor of John Madden’s voice over the muted roar of 70,000 fans.

But football tickles more that just the hemispheres of the brain that govern our hyper-consumerist instincts. I, myself, am not made of stone. The mesmerizing din of football on a nearby TV takes me back to being little, drowsing in and out of sleep on the scratchy, cigarette-burnt, houndstooth-patterned carpet in my grandma’s smoky living room—in a good way.

Though football doesn’t mean much to me, I still like it. I watch it sometimes, though I can’t name more than a few players. When it’s on I root for the underdog (being from a city without a home team—unless, of course, the underdog is from Texas or Florida).

If I had to choose a team, I’d pick the Cincinnati Bengals. The beating they received from Joe Montana’s 49ers in Super Bowl XXIII, the first I remember watching, stained them permanently. And there’s a special alcove in my heart for losers. Plus, their uniforms are neat.