Each work of found art in graphic design senior Elizabeth Thompson’s recently opened art show, “Unsigned,” is a medley of contributions by anonymous users consisting of scribbles, doodles, sketches and vaporous bits of text. The show features a series of collected illustration boards salvaged from Blick Art Materials in the Pearl District.

Each work of found art in graphic design senior Elizabeth Thompson’s recently opened art show, “Unsigned,” is a medley of contributions by anonymous users consisting of scribbles, doodles, sketches and vaporous bits of text. The show features a series of collected illustration boards salvaged from Blick Art Materials in the Pearl District. 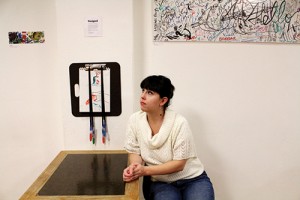 Elizabeth Thompson contemplates her future as a curator.

Generally used by art store patrons for testing pens, the boards each feature a variety of lines and colors. Ranging in length from inches to several feet, the hanged works are the result of Thompson’s collecting, archiving and reprinting the salvaged originals.

Tonga, 2012, pen on illustration board

Hello, 2012, pen on illustration board

Eyes, 2012, pen on illustration board

Awesome, 2012, pen and pencil on illustration board

The exhibition began last week and runs at Food For Thought Cafe, located in the basement of the Smith Memorial Student Union, through the beginning of winter term.

The show was put together with the help of cafe employee Chelsea Reich. Reich, who shares with the rest of the co-op staff in the duties of running the space, also described herself as the liaison for the cafe gallery.

Despite the problems caused by the recent flood in the cafe, Reich and Thompson (who is the Vanguard’s production manager) worked together to get the show up, and are still in the process of discussing de-installation dates for the exhibit.

Each of the works has its own theme and style, derived from a scattered collection of multiple styles in collaboration. Thompson pointed to a vibrant work loaded with an array of colors, titled Hello, as her favorite.

At only a few inches across, it is among the smaller compositions in the series, particularly when compared to the large-scale centerpiece, Test, which featured the scribbles and hash-marks commonly attributed to illustration boards.

“I was initially going to print Hello as the largest, but I wanted the largest piece to be a work that was immediately recognizable for what it is,” Thompson said.

Thompson’s exhibit is just one of several that show at Food For Thought throughout the year. The cafe shows all sorts of works, most often featuring students at Portland State. Though sometimes the gallery wall will feature themes, often the shows are defined by the hanging artists.

“We did have a show that was about feminism before I started with the gallery,” Reich said. “But usually, it’s just three or four artists showing their own work. We’ve had painting, photography and printmaking; it just depends on who is showing.”

Thompson’s show also has an interactive element in the form of a guest book. Hanging along with the artwork, a sketchbook invites patrons to make their own additions to the exhibition. Thompson explained that she felt it best fit the spirit of anonymous contributions to the hanging work.

“Most art shows have a guest book, but I’m hoping people will take what they see and add a couple of lines to our book,” Thompson said.

Though the cafe staff hasn’t nailed down a hard date for closure of the exhibit, they promised to keep Thompson’s work up through early winter term so visitors and patrons have an opportunity to see the show upon returning from winter break.

PSU adjunct professor and Portland-based designer Adam R. Garcia worked with Thompson on the piece for a university design class that focused on “design as a participatory, engaging experience in culture,” Garcia said in an email.

“[Thompson’s] project is taking unrecognized, ‘throw away’ collaborative creations by a multitude of strangers, and re-contextualizing them as something to pay attention to,” Garcia said. “It’s the idea of it being an intentional artistic collaboration as well as the idea that it’s the product of an artistic medium (pens and markers) that is relevant. It makes you think twice, as well as try to find threads and connections inside the words, lines and doodles of each canvas.”

Thompson has other show ideas in mind but, for now, her primary interest is adding to her collection of illustration boards. In addition to the exhibit, she is building an online archive, which she hopes to continue updating as she picks up new works.

“I have other show ideas percolating, but I do want to keep collecting these,” Thompson said. “And I plan to keep the online archive going, even after the show is done.”