For commuters who find themselves walking or using public transit on a regular basis, the sight of Portland’s many homeless can become numbing. Even the most compassionate person cannot stop to consider the life and context of every downtrodden soul they encounter. Inevitably, the gloomy specter of indifference surfaces.

For commuters who find themselves walking or using public transit on a regular basis, the sight of Portland’s many homeless can become numbing. Even the most compassionate person cannot stop to consider the life and context of every downtrodden soul they encounter. Inevitably, the gloomy specter of indifference surfaces. 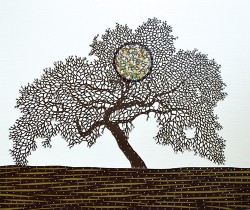 P:ear Tree: Hamblin’s work Swallow will be part of her collaborative exhibit with the city’s homeless youth at P:ear Gallery in the Pearl.

Though there are several ways to help the less fortunate, many only involve one-way interactions, like donating money to a worthy cause. Portland art gallery P:ear seeks to change this dynamic by giving homeless youth a chance to share their art with the city at large.

On Dec. 6, P:ear will host a First Thursday event showcasing the creations of the youth alongside the work of special guest Kim Hamblin.

“It’s part of our mentoring program,” Arend said. “The primary thing that we do with these kids is that we mentor them through having them have experiences with healthy adults.”

“Circumference” is the exhibit’s title, which will be represented from the art on the walls to the doughnuts brought in by local food cart Donut-O-Rama. The pieces on display will not be segregated by professional and amateur, but instead will feature an organic blend of works from both Hamblin and the P:ear artists.

“For many of these kids, it’s really the only showcase that they have, and the only time that they really have to interact with the public in a space in which they really welcome the community into their space,” Arend said. “The dynamic is totally different than all the other [times] that the kids interact with the community, which is mainly when they’re on the street corner asking for change.”

This will mark Hamblin’s third time working with the gallery.

“I think it helps the younger artist[s] to present a little better than they would have before,” she said. “They get to see how professional artists show and hang art.”

Hamblin resides in the Oregon countryside on about 50 acres of land. She is often inspired by the vibrant bird life in the area. A particularly striking piece called Sparrow will be on display.

The piece depicts the titular bird with a corresponding thought bubble, which itself is made up of dozens of bubbles with paintings of farmland, telephone poles, kites and other birds. Sparrow, like much of Hamblin’s work, utilizes a heavy mix of traditional painting with cut plywood and nails.

Reflecting on her formative years, Hamblin remembers what it was like to be a young artist.

“When you’re young, I think you’re more open in some ways, and also I think you’re a little bit more cocky,” Hamblin said. “It’s a funny mixture of openness to the world and being able to embrace everything that comes into your head—but also, you kind of think you know how to do everything.”

Portland State will have a presence at the exhibit, with assistant professor Sarah Dougher’s Senior Capstone students in attendance. Dougher’s capstone is called Addressing the Food Gap and aims to study the relationship between the situation of the homeless with the food system in Portland.

“I work with P:ear in part because…they prioritize the nutrition of the people that they work with,” Dougher said. “P:ear provides an opportunity for students to really make the connection between being well-nourished and being able to make a change in their life.”

Students involved in Dougher’s capstone include Jennifer Trotti, Solay Freeman and Bobbi Welch. Each have separate projects with P:ear and the surrounding community.

“I think our capstone project shares similar goals with P:ear in that both want to raise awareness about these issues (youth homelessness, food justice, etc.) and show what is being done about them on both a large and a small scale,” Welch said in an email.

In addition to live, on-site cooking demonstrations for the First Thursday event, the students will be taking the lead in a zine presentation.

“The goal of the zine is to find a way to directly work with the students, to create a space for dialog between the students and members of our class, and ultimately to create a document of what we were able to accomplish,” Trotti said in an email.

Encouraging collaboration over instruction is a key part of Dougher’s game plan.

“Part of what we practice in the class is understanding how we teach each other across horizontal planes as opposed to vertical planes,” Dougher said. “Instead of being a top-down ‘we’re helping out homeless people’ model, what I like to make sure my students understand is where they share common ground with the kids in P:ear.”

As Arend points out, most of the community’s interactions with the P:ear artists happen on the street corner. By providing a showcase and a space for the homeless youth of Portland to talk back to the city, P:ear goes a long way to dissolve the apathy that can accumulate in even the most sympathetic of citizens.

“These kids are elevated to the status of Portland artists, and the community is coming to appreciate their works and see them in a whole new way,” Arend said. “It’s really a transformative experience.”