From the Iran hostage crisis to long lines for gas to inflation, the presidency of Jimmy Carter is not always remembered in the most positive light. Oregon culture, however, might not have been the same without his signature on a 1978 bill legalizing the home-brewing of beer for the first time since Prohibition. 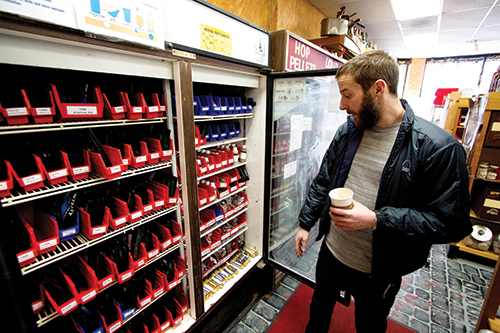 From the Iran hostage crisis to long lines for gas to inflation, the presidency of Jimmy Carter is not always remembered in the most positive light.

Oregon culture, however, might not have been the same without his signature on a 1978 bill legalizing the home-brewing of beer for the first time since Prohibition.

Today the state hosts 133 breweries, with Portland itself home to a world-record 51, according to the Oregon Brewers Guild.

So, with months of cold, wet weather ahead, students looking for a new indoor hobby (or looking to become the next Widmer Brothers or BridgePort Brewing Company) might consider brewing their first batch of beer.

What may surprise them, though, is that the project can be accomplished with as few as three hours of work (plus about three weeks of aging) in a space as small as an apartment or dorm room, said Jeremy Frey, an employee at F. H. Steinbart Co. Homebrew Supply Shop in Southeast Portland.

Water and a heating source, Frey said, are really the only two requirements other than the ingredients.

Walking through the store, which, at 95 years old, claims to be the oldest home-brew supply store in the country, it’s easy to see why the idea of making one’s own beer from scratch can seem daunting.

The dusty, antique bottles, worn floors and esoteric products give it the feel of an old-fashioned country hardware store, while the products themselves, with names like “Dry Isinglass Finings” and “Immersion Wort Chiller” seem like they belong in a lab, not in beer.

But brewing one’s first one- or five-gallon batch of beer is really not complicated, Frey said.

How to brew: 10 steps (as explained by Jeremy Frey)

1. Purchase equipment kit (which will include recipe), spend 10–15 minutes talking to staff if desired.

3. Boil mixture with hops for one hour (adding more hops during boil as called for in recipe).

4. Take mixture (wort) off of heat and chill in sink for about 15 minutes.

8. Siphon yeast into bucket, adding sugar as called for in recipe.

9. Bottle and cap, leaving at room temperature for about a week.

“I guess the biggest misconception is that it’ll take you a lot of practice to turn out a great product,” he said. “Everybody thinks with their first batch, ‘I’m prepared for it to suck,’ and that’s not really the truth. I think most people love their first batch and make perfectly good beer.”

But how exactly does one get started?

While everything needed to brew is, of course, available online, there are advantages to a brick-and-mortar store, Frey said. “When you walk into any great home-brew store, we’ll sit you down and walk you through the steps and just show you—show you what the ingredients look like and how you use them.”

While a brief chat and some guidance from a book or the Internet is enough for some to get brewing, most brewing supply stores offer 2- to 3-hour courses for aspiring home brewers, which usually walk students through the brewing of a batch of beer from start
to finish.

Over at the Homebrew Exchange brewing supply store in North Portland, retail manager Beth Staus said the decision whether to take a course depends on the
person.

“I never took a class,” she said. “But I think my husband would have learned better in a class.”

Whether one is more of a visual learner or book learner is a factor, Staus said, though watching someone brew can take away some of the intimidation factor. “You just see how easy it is,” she said.

Retail associate Hannah Hall said she thinks that it’s easier to learn from a class. “You can ask questions that are random and weird,” she said.

But how one learns to brew or what method they use isn’t the point, Staus said: “Beer brewing has a lot of gray areas,” she explained.

Ultimately the decision to home-brew comes down to the freedom it offers, Frey said.

“People home-brew so that they can try different things,” he said. “They like to see the ingredients go in and then taste what that did, they like to understand the flavors, [and] that is what drives their passion to brew.”

Sorting out the spring game