Ignore the red-aproned ringers this year and show local support

It’s always tempting to drop a dollar or two into one of the Salvation Army’s red kettles. Frequently located right outside your holiday shopping spots, the easy access provides an instant sensation of altruism that’s hard to beat.

Ignore the red-aproned ringers this year and show local support

It’s always tempting to drop a dollar or two into one of the Salvation Army’s red kettles. Frequently located right outside your holiday shopping spots, the easy access provides an instant sensation of altruism that’s hard to beat. 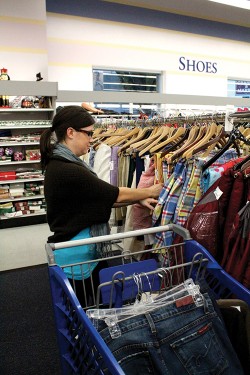 Spread the Goodwill by donating your used clothing to your local Goodwill dropoff location.

With just a little extra effort, though, you can donate to a charity that benefits those in need more effectively and doesn’t discriminate against homosexuality.

The Salvation Army is an evangelical Christian charity with a history of homophobia, and in June their Australia-based media relations director, Major Andrew Craibe, said the charity aligns with antigay scripture.

Statements of apology were issued, but gay rights activists and members of the lesbian, gay, bisexual, transgender and queer community continue to promote boycotting the organization.

On top of this, only about 84 percent of U.S. donations go toward program expenses. If you donated $100, about $16 of it would go toward administrative and advertising costs.

An easy alternative to ensure that your donation is used the way you intended is by giving nonmonetary contributions. Instead of donating to the Salvation Army this year, here are a few local options for giving:

Toys
A fun way to impact a life during the holidays is to donate to KGW’s Great Toy Drive. Searching through all the Legos and action figures and stumbling upon the 2012 Furby means bringing joy to a child and getting into the excitement of the season. Toys can be dropped off at your local Wells Fargo, including the branch on campus at Southwest Fifth Avenue and Hall Street.

Technology and gadgets
If you have obsolete technology or nonfunctioning gadgets such as old cell phones, game consoles or printers, Free Geek is an impressive nonprofit to donate to. It offers classes to help build technological skills in the community, sells inexpensive hardware and recycles parts it can’t reuse. Donations can be taken to Free Geek’s offices at 1731 SE 10th Ave.

Food
The Oregon Food Bank has paired up with Pioneer Courthouse Square this year for the annual Tree Lighting Ceremony on Nov. 23 and the Tuba Christmas Concert on Dec. 8. Join in on the festivities and help feed those in need by dropping off some nonperishable food.

Clothing
An oldie but a goodie, Goodwill provides employment and job training to people who often can’t find work elsewhere, and it sells your donated clothing at low, not-for-profit prices. The best part is that it doesn’t cost you any additional money, and there’s a drop-off location at 1943 SE Sixth Ave.

Blood
Though it sounds a bit macabre, donating blood during the holidays is a great way to help save a life. According to the American Red Cross website, blood donations often decline during the holidays. You can make a difference by stopping into the North Portland location at 3131 N Vancouver Ave.

Wake me up when it’s over