If you’re interested in checking out the Northwest Film Center’s Northwest Filmmakers’ Festival, time is running out. But don’t fret: In this, its final weekend, the center will continue to screen a wealth of regionally produced films, and tickets remain readily available.

If you’re interested in checking out the Northwest Film Center’s Northwest Filmmakers’ Festival, time is running out. But don’t fret: In this, its final weekend, the center will continue to screen a wealth of regionally produced films, and tickets remain readily available. 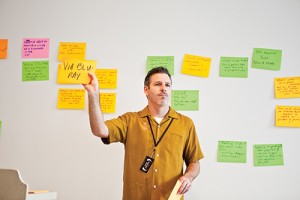 The festival, in its 39th year, is attended by a mixed audience of filmmakers and curious patrons, offering an opportunity for artists of all skill levels to mix and share ideas.

In addition to the films themselves, the festival offers several programs over the course of the week, giving filmmakers opportunities to host discussions and workshops.

Last Friday’s opening was well attended, with festivalgoers gathering from throughout the region over food provided by the Pink Rose restaurant and drinks provided by MacTarnahan’s Brewing Company. In the central room at the
center, a film depicted a drive across Pacific Northwest highways through various seasons while patrons crowded the space, from the side rooms to the center’s various halls.

“I think the excitement here mirrors the film scene in the Northwest,” Thomas Phillipson, the festival’s director, said. “Filmmakers are making great movies here. Filmmaker turnout is doing great. There are more people coming out.”

The festival will run through Sunday with screenings of short films and award-winners by artists of both local and regional renown. The films will be shown at the Portland Art Museum’s Whitsell Auditorium, though previous evenings have included screenings in Northwest Portland’s Mission Theatre.

The festival features a variety of short and feature-length films with a range of run times, from several minutes to an hour or more. Many of these films have a direct narrative, while others follow more abstract or documentary themes.

Among the latter is a two-part video study of a wood chip pile by Portland filmmaker Orland Nutt. Titled Dear Peter, Wood Chips I and II, the films explore the pile’s lifespan and changes over the course of a year, as it decomposes, dries out and eventually develops signs of human habitation and manipulation.

Nutt narrates the works as open letters to a friend named Peter, to whom he describes his attempts to reconcile his sentiments toward the heap.

“I wanted to find something I could appreciate about this thing that was initially disgusting to me,” Nutt said.

Though he also works on longer projects, Nutt explained that he often works on short projects like the Dear Peter films in tandem with the more ambitious scripts he has in development.

“These sorts of videos are more like quick side projects,” Nutt said. “It’s just collected footage from my walk-around camera. I just try to find the story and share my perspective.”

Many short films like Nutt’s will be screened over the course of the weekend, joined by longer films such as Steve Doughton’s Buoy.

The 90-minute Buoy follows a phone call between a suburban woman and her estranged brother, who has recently survived a shipwreck. Their phone conversation shapes the narrative, in which shared memories and the challenges of their emotional distance inform the story.

“My Dinner with Andre meets The Deadliest Catch—that was my pitch when I was looking for funding,” Doughton said. “It’s a story about a brother and sister that haven’t been in touch for years. He goes through a tragic event, which compels him to call his sister. The story revolves around their attempt to reconnect.”

But the screenings are not limited to works created by seasoned filmmakers like Nutt and Doughton. Saturday’s screenings will begin with a collection of winners from the center’s Fresh Film Northwest festival, which features submissions from aspiring filmmakers between ages 13 and 19.

“We’re really excited to bring in some of the work from Fresh Film, which used to be called the Young People’s Film Festival,” Phillipson said. “We wanted to make something bigger out of that. We’re hoping to give younger people a platform as well.”

The festival’s closing weekend promises something for everyone. Aside from the works of Nutt and Doughton, the center will show films as diverse as a documentary about an early-1900s doctor who starved her patients, a romantic comedy about a man’s chance run-in with his friend’s sister and an open letter to the dwarf planet, Pluto.

Sunday’s final film, The Great Northwest, features local filmmaker Matt McCormick’s retracing of a 1958 road trip by four Seattle women based on the documentation in a scrapbook he found in an area thrift store.

The Northwest Filmmakers’ Festival offers a unique weekend experience for any lover of film, but aspiring filmmakers in particular will have the opportunity to meet and draw from the knowledge of those who have put years of work into the field.

Doughton, who worked in New York for years as a production assistant, lauded the Northwest film scene.

“They’re very supportive,” Doughton said. “People are helpful on all levels, from funding to helping provide locations. There’s an incredible pool of technical talent, as well.”

Asked what advice he might offer a student interested in film, Doughton suggested that any filmmaker should spend time as a production assistant.

“Also, devour the movies,” Doughton said. “Watch everything you can. And if you want to be a director, write constantly.

“And don’t ever buy a boat or a pricey car,” he added, laughing.