This month’s First Thursday event sported art of all varieties, but it was a printmaker’s night at several of the Northwest galleries. The Vanguard spent much of its tour at the Pearl District’s PDX Contemporary Art, viewing its current group print exhibition. It features pieces by artists working under the Ford Family Foundation’s Golden Spot residency program at the Oregon-based Crow’s Shadow Institute of the Arts. 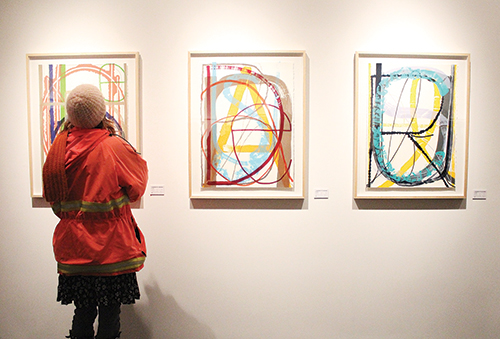 Printmaker, Printmaker, Make me a print: A First Thursday attendee views the prints on display at the PDX Contemporary Art Gallery. The gallery features art by six Oregon-based artists. Photo by Corinna Scott.

This month’s First Thursday event sported art of all varieties, but it was a printmaker’s night at several of the Northwest galleries.

The Vanguard spent much of its tour at the Pearl District’s PDX Contemporary Art, viewing its current group print exhibition. It features pieces by artists working under the Ford Family Foundation’s Golden Spot residency program at the Oregon-based Crow’s Shadow Institute of the Arts.

Each of the artists served an individual, two-week residency at Crow’s Shadow, located at the St. Andrew’s Mission schoolhouse outside the Umatilla Reservation. There, each artist worked under the guidance of master printer Frank Janzen.

“I’ve done a lot of different residencies, but this is the first time that I’ve worked with a master printmaker,” artist and longtime printmaker Susan Murrell said. In addition to having run her own Portland-based press on Alberta Street, Murrell has shown in multiple exhibitions. She also teaches printmaking at Eastern Oregon University in La Grande.

“It was a whole different experience,” she said. “I think of a lot of residencies as very solitary endeavors: a lot of research, struggling in your own studio, meeting your demons. Here, it was different. Frank and his assistant would be there at 8:30 a.m. asking what we were going to make.”

Murrell’s displayed work featured abstract, watery shapes alluding to cavernous spaces and root-like networks. Her work Tunnel Through plays with the eye, using shapes and hazy layers of green to create an effect similar to light peering through a shimmering canopy of leaves or a maze of roots.

“I work abstractly, but I’m really interested in this idea of having a visual vernacular that kind of moves between what I call ‘analytical signifiers,’ or the things that say to us that the work is about some sort of quantitative knowledge, like landscape or geography,” Murrell said. “I mix a lot of my metaphors. I like the idea of confusing space.”

Not all of the artists, however, are longtime printmakers. Portland-based painter, radio host and writer Eva Lake explained that her time at Crow’s Shadow was her first venture into printmaking.

“These prints are basically riffing off my painting practice,” she said. “We had an opportunity to do something hard-edge with the printing process. I wanted something arresting and aggressive.”

Lake, who also hosts KBOO’s program Art Focus, displayed a collection of prints featuring unified vertical bands of shifting color, set against backgrounds in darker, withdrawn tones. The vibrant play of colors explodes from the surface of the print and across the wall, like light waves stroking across open space.

Her sophisticated color choice and use of a cohesive repetition of shape and direction create an effect similar to some of her painted works. She explained her interest in painting by pointing to her love of vivid colors.

“I want my paintings to be a machine gun, relentless,” Lake said. “But I want them to be colorful, hot and sexy. Too many people strip the color to appear serious. It’s called chromophobia—a fear of colors.”

Prints also made up the bulk of the display at the nearby Augen Gallery on Northwest Davis Street. The gallery’s front half showed the work of Josef Albers, an influential mid-20th century artist and instructor. Albers taught in such notable institutions as the Bauhaus in Dessau, Germany, and the avant-garde Black Mountain College in North Carolina.

“It deals with exercises Albers was doing in classes he taught,” said Augen owner and gallery director Bob Kochs of the Interaction of Color exhibit. “In his work, you can get a sense of how contemporary art developed, where it came from.”

“It encapsulates every idea Albers worked on throughout his entire career,” Kochs explained.

We finished our tour at the Everett Station Lofts, where we found our way to the Pony Club. This small, artist-run gallery often boasts a hectic crowd on First Thursday.

“Each month we do a new show here, and we also do our studio work here,” Carter said. “We all share in responsibilities. Each artist has two months out of the year to plan for. We also have someone on hand to keep the space open during the week.”

Despite this week’s weather-induced low turnout, the Pony Club’s artists had only praise for the city that usually keeps them bustling. Carter, who’s lived throughout the region as both a student and an art producer, said he’d be hard-pressed to leave Portland.

“There’s a good community, here. I feel way more at home here than I have anywhere [else].”