Since early March, some of us at PSU have been standing for half an hour Wednesday at noon in the South Park Blocks, a silent vigil for peace. Recently, several people have asked me if I intend to continue this, now that the war in Iraq appears to be winding down.

I can only speak for myself. Here are reason I intend to continue the vigil.

To support peace today requires more than advocating a stop to the shooting and the bombs. In the present case, we must confront and attempt to change the policies and attitudes that have led up to the Iraq war. I mean belligerent, self-righteous unilateralism which has characterized this administration’s foreign policy with respect to Iraq. We must insist on a return to a more traditional U.S. stance toward foreign affairs embraced by moderates “on both sides of the aisle” in Congress. The heart of this stance is respect for international law and a decent respect for the opinions of mankind. One practical thrust of these core attitudes is commitment to solve international problems within the framework of the United Nations.

An immediate practical application of this policy would require the U.S. government to invite the United Nations in a chief architect of any “nation building” effort in Iraq and to call now for a multi-national peacekeeping force. Nothing short of this is likely to dispel the widespread skepticism about U.S. intentions. Until the Bush administration takes practical steps toward working within the community of nations and to constrain its foreign policy accordingly, we are likely to see more violence perpetrated on other countries and a growing resentment and violent responses to U.S. actions.

The goal of lasting peace has always required us to speak out for the changes conducive to peace. For me, this is reason enough to continue standing that half-hour Wednesday in the Park Blocks. 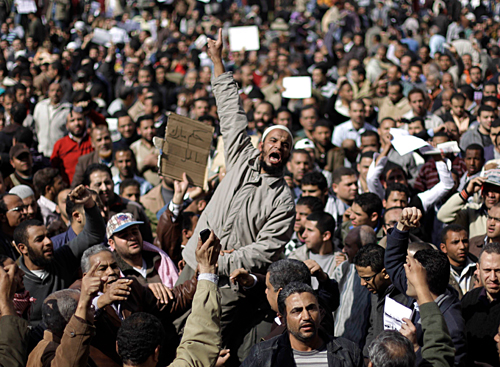 The future of Egypt