A Catholic high school in New Jersey has implemented a new rule: No cursing. But only if you’re a young lady. Female students at Queen of Peace High School in Arlington, N.J. have been asked to take a vow to avoid the use of foul language while at school. Their male counterparts have been asked to refrain from using expletives as well—around young women in the halls and classrooms. 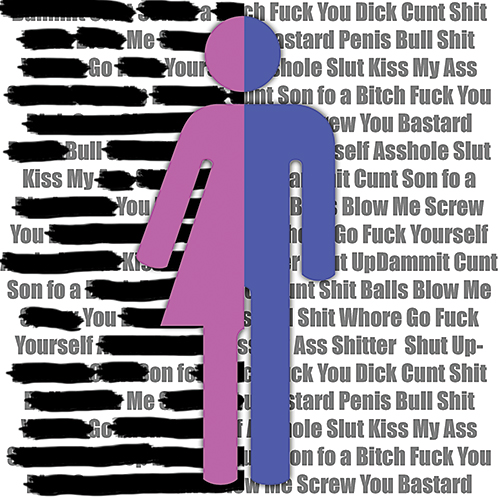 A Catholic high school in New Jersey has implemented a new rule: No cursing. But only if you’re a young lady.

Female students at Queen of Peace High School in Arlington, N.J. have been asked to take a vow to avoid the use of foul language while at school. Their male counterparts have been asked to refrain from using expletives as well—around young women in the halls and classrooms.

However, it’s completely acceptable for boys to swear when there are no delicate female sensibilities to offend.

This rule was implemented after school leaders worried that female students were becoming increasingly unladylike with their use of four- (and sometimes three- or five-) letter words. In order to combat this trend, it was only reasonable to have them vow to desist from expressing themselves in such uncouth language, correct?

This is unequivocally, patently, incontestably inaccurate.

The long-standing false dichotomy that a person cannot be erudite or well-spoken while retaining expletives in her vocabulary is laughable, at best. Some of the most venerated authors and speakers in recent memory have attested to the merits of foul language. As Brendan Gill once wrote, “Obscenity is a notable enhancer of life and is suppressed at grave peril to the arts.”

Also, there’s the troubling double standard expressed in the rule: A lady who uses profanity is unladylike, whereas a gentleman caught in the same behavior is simply expressing himself. One student of the high school—male, for your reference—even went so far as to say that girls who used foul language were “unattractive.”

Interestingly enough, the same young man said he had no problems unleashing expletives on anyone in earshot when things go poorly for him while playing baseball. He doesn’t expect this to change.

And (not that a Catholic school would really be expected to pay much attention to it) science says that profanity has plenty of benefits. According to a study by Florida State University, the use of profanity has been linked to reduced stress and a higher pain threshold.

Or, as Mark Twain so eloquently put it, “Under certain circumstances, profanity provides a relief denied even to prayer.”

Additionally, people who use profanity have been found to have overall better coping skills for stress, likely because they express their negative emotions rather than bottle them up. Shockingly, this has been recognized since 1901, when G.T.W. Patrick pointedly stated in his analysis “The Psychology of Profanity” that the repression of foul language enacted by churches might actually cause more stress.

Less scientifically, there’s blatant sexism in action here. Granted, it’s sexist to the point of absurdity, but sexism is still sexism. What makes a lady using foul language so much worse than a man doing the same? And in terms of their purported non double standard, why is it so horrible if female students are privy to the use of expletives by the menfolk?

Of course, nobody expects a Catholic high school to be anything but sexist, so this isn’t an unexpected development. It is, however, a shame to see sexist attitudes being written into school rules of any sort, particularly when the rules are rooted in incorrect assumptions and shaming. If cursing was really so monumental a problem, you’d expect a school-wide, gender-neutral ban of foul language. Restricting its use to one sex is ineffective.

To the staff of Queen of Peace: I’m sympathetic to your plight. Sometimes, people use foul language around me. But as long as they’re not using it to bully or attack, they’re free to use whatever language they want.

So, while Queen of Peace may not like it, I say: Fuck that shit. If they’re not being assholes about it, let my fellow bitches speak their damn minds.

Ex-PSU employee confesses to theft of $312K in university electronics

The search is on