A few days ago it appeared that Portland State had reached its new ultimate limits with acquisition of the Doubletree Hotel at 310 SW Lincoln.

Now it’s been reveled that PSU is already into another project which extends the university presence southwest, almost to the I-5 freeway. It comes under a creative financing agreement worked out by Jay Kenton, vice president for finance and administration.

“On July 1, we entered into a lease with an option to buy the David Evans building located at 2828 S.W, Corbett St.” Kenton explained. “It’s the old headquarters of the David Evans Corporation. They’re supporters of the university. We are hoping to create a business accelerator there. Some people would call it an incubation center.”

The building will be rented to startup companies that wish to work with a consortium of organizations allied on the project with the university. These include the Portland Development Commission, Oregon Health and Science University, Providence Medical Center and the Oregon Economic and Community Development department.

The area of the newly-acquired building was once called “old south Portland.” Historically, it served as a center of neighborhood housing for many working class newcomers. It is now generally identified as the Corbett/Terwilliger/Lair Hill neighborhood.

The structure is basically 40,000 sq. ft. built into a hillside with a parking garage underneath. It consists of two elevated concrete slabs of equal size, with an elevator and floor to ceiling windows. The building has an open floor plan that can easily be renovated and customized to specific needs. It is close enough to the I-5 freeway that freeway noise is audible outside the building but not inside.

The accelerator will be designed to serve startup companies who are working with latent technologies and are trying to perfect a product that is marketable. They would rent working space in the building, which has room for multiple tenants simultaneously.

“They would then be able to use the laboratories at the universities and be able to interact with the faculties that are working in similar field areas,” Kenton said.” They also would like to work with students and hire student employees to help them.”

The ultimate goal of the project, he said, is to create sustainable high-paying jobs and to use the accelerator as a mechanism to recruit and retain new businesses in Portland. The project depends on its ability to work with the local venture capital community. Many of the referrals to the accelerator are coming from venture capitalists. In return for providing this service to budding companies, the university receives more than rent.

“It gives us the opportunity to get our faculty to think in more of an applied realm as opposed to a theoretical realm,” Kenton said. “It also gives students an opportunity to work with these entrepreneurs.”

He elaborated on another advantage of the concept. The school of business has recently entered into a partnership with the Lewis & Clark law school called “icicle” (ICLE), the interdisciplinary center for law and entrepreneurship. Second year MBA students at PSU would study side-by-side with second or third year doctor of jurisprudence students at Lewis & Clark. Law students would develop an appreciation for the business perspective and business students would develop an appreciation for the law perspective.

ICLE would conduct joint classes which would include internships or capstones where students would meet with these developing companies. They would provide various services to the companies. They would also help them develop their business plans, their marketing plans and their financial plans. Students could also help protect their intellectual property with copyrights or patents and advise them on their best company form, whether it be corporation, partnership, or individual proprietorship.

“It’s a real world experience for our students. And it’s assistance that we’re making available to the entities that want to move in,” Kenton explained. In his opinion, there are multiple mutual benefits to the companies, to the universities and other partners involved and to the community.

In exchange for assisting the companies in developing their technology, PSU may find opportunities to take ownership positions in some companies by acquiring their stock. The university already has done this with Octavian Scientific, receiving some of its stock. If such companies are successful, the university will have equity interest in the company so if the company becomes more profitable and the stock goes up, PSU may own something of value.

Creative finance is making this project possible. Portland Development Commission is funding some of the tentative improvements needed. PDC also funded a request for proposal to hire a consultant to assist the consortium.

The PDC wants its consultant to determine the feasibility of this multi-tenant accelerator. It looks for a facility that will have a positive effect on the community’s economic health by maximizing the success of emerging companies and also serve as a dynamic model of a sustainable, efficient business operation. PDC provided up to $100,000 for this study and the consortium hired a consultant, ICF Consulting of San Francisco. The consultant began work in September and expects to deliver the final report in January or February.

In Kenton’s concept, the accelerator would have a director who would serve as intermediary between the institutions collaborating in the accelerator and the companies that are using it. This would include introducing the incubator to student groups that would become involved.

A combination of investor friends of the university actually bought the building from the Evans company and is leasing it back to PSU for $8 a square foot. PSU has the option to buy it back from them at their cost plus what Kenton called a minor amount. That buyback, he implied, would be through the PSU Foundation.

Portland State, he said, is now negotiating with multiple companies, including high tech, medical technology and other bioscience companies that want to locate in the accelerator. These are typically startup companies operating on their startup venture capital with no present income, hence they are cost-sensitive. The only occupants of the building now are some computer science faculty using it to test radio waves for wireless networking.

“Right now we’re kind of in a holding pattern waiting for these consultants to do their work.” Kenton said. “But we’ve been touring prospective tenants throughout and expect to have leases in place very soon.”Many of these prospects, he said, already have relationships with PSU faculty.

“We’re kind of in a startup phase,” he concluded. “Exactly where it will go is to be determined by this group and the consulting firm.” 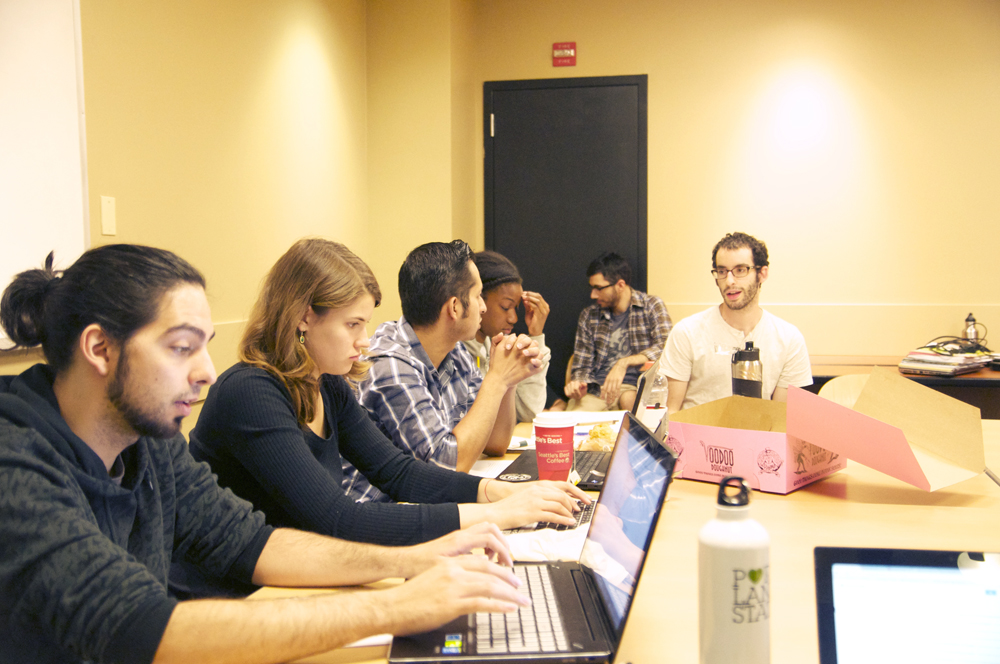