Portland State’s Branford P. Millar library is participating in the national September Project throughout this month in order to commemorate the events of the 2001 September 11 World Trade Center attacks.

As a part of the September Project, a group that aids libraries in presenting displays, holding activities, and hosting forums and speakers that center on themes of freedom and citizenship, the Millar Library will also host the annual American Library Association’s (ALA) Banned Books Week.

The Banned Books Week exhibit showcases books that have been either forbidden or challenged for banning in U.S. schools. Libraries across the country use this week to educate students on the historical and present situations in which books have been banned, or are currently proposed to be banned, in schools.

"Of course librarians are not into burning or banning books," said Helen Spalding, Portland State University librarian. "We’re taking the opportunity to provide an exhibit and speaker that deal with censorship."

Set up in early September, the Banned Books Week display will remain on display on the first floor of the library through the first week of October.

Jeffrey St. Clair, a journalist and author, will speak at the Millar library on Sept. 29, where he will read from his newest book, Grand Theft Pentagon. St. Clair is co-editor of the political newsletter CounterPunch.

The ALA compiles a list of what were considered the Most Challenged Books by various groups and institutions from the previous year. Some of these titles may be included in the display, along with historically banned books.

"It’s often shocking to see what those [Most Challenged Books] are," said Spalding. In 2005, the list was topped by It’s Perfectly Normal, a nonfiction work written for younger audiences. The book discusses topics ranging from sexuality to religious viewpoints in a way made easy for children to understand.

Challenges to remove a book from school or library are tabulated by the number of written complaints submitted to the institution. Books that rank high on the list of the 100 Most Challenged Books from 1990-2000 include the Scary Story series by Alvin Schwartz, Of Mice and Men by John Steinbeck, and the Harry Potter series by J.K. Rowling.

Many complaints are filed because of conflicting feelings about sexually explicit material, language that is considered offensive, material considered unsuitable for certain age groups and promotion of non-traditional themes, such as wizardry and sorcery.

The ALA, a membership-based committee of persons interested in library service, has annually observed Banned Books Week in libraries annually across the nation since 1982. According to the September Project, more than 1,100 libraries in 34 countries have been involved in September Project activities since 2004.

PSU is participating in the September Project this year with an exhibit that includes the written lyrics to Bruce Springsteen’s “The Rising,” a song from his 2002-released album of the same title. The album was created as a tribute to the lives affected by the events of Sept. 11, 2001.

"It took a number of interactions – two or three – to get the copyright from Bruce Springsteen," said Kimberly Willson-St. Clair, reference support supervisor of the PSU library.

The lyrics are presented on poster-sized paper between bookcases in the new books section of the library. "It emphasizes reading with the lyrics here," Willson-St. Clair said.

An aerial photograph taken of Ground Zero is mounted on the wall at the end of the display, which was taken from the Portland State Library Government Information Depository. An interactive and educational display for students and visitors will be added to address current political issues, such as discussion of the current war in Iraq and discerning acts of terrorism from the war. 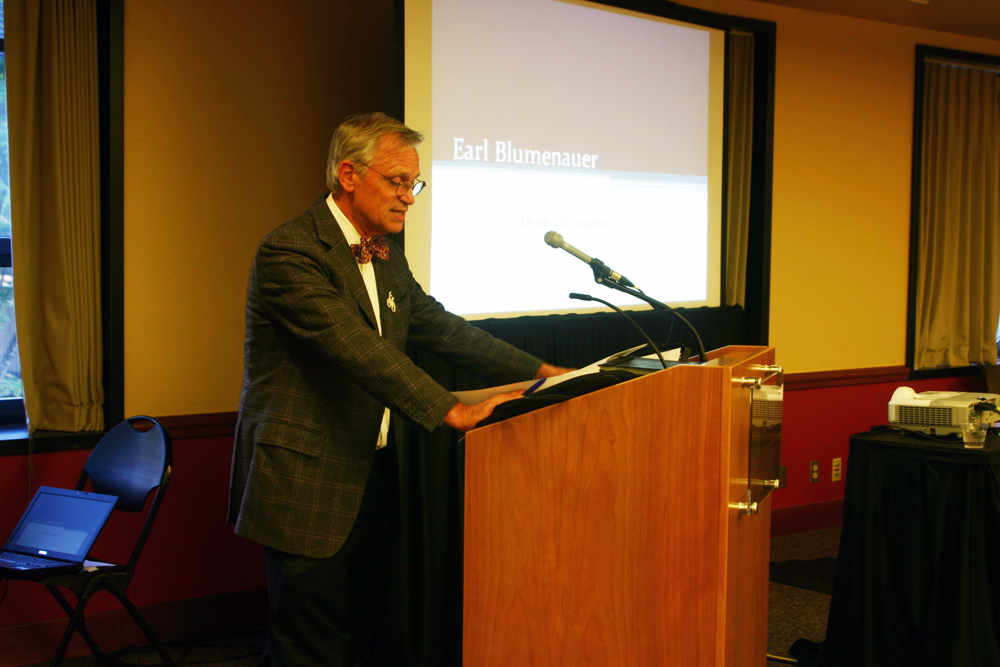