Everyone knows that Portland is well known for its plethora of haircut rock, but our fair city is also host to several punk and metal staples, such as Poison Idea, Agalloch, Millions of Dead Cops and Tragedy.

Everyone knows that Portland is well known for its plethora of haircut rock, but our fair city is also host to several punk and metal staples, such as Poison Idea, Agalloch, Millions of Dead Cops and Tragedy.

With legends such as these and many up-and-comers, one would think that punk rock and metal venues are flourishing in Portland. Nothing could be further from the truth. Venues like Food Hole, Satyricon and the corny-but-still-all-ages Rock and Roll Pizza have all gone out, making way for crappier venues.

“But Nicholas,” you ask, “How do I know what’s good and what’s crap?” Good question. Read on.

Plan B
Typically books: Portland’s nascent heshers, stoner metal bands
Nestled snugly in the inner southeast Industrial District, Plan B has been booking solid shows for a long time now. The space is intimate—that is to say, when you walk in, you’re mere feet from the stage.

East End
Typically books: Aggressive music of all types, a ton of great rock shows
I know, I know. You thought I was going to talk about The Know, the punk rock staple that predates Thai food on Alberta. East End, however, is much more centralized and campus-friendly, if only for the proximity.

The shows are about as punk rock as they come, as they replicate the dank North Portland basement surprisingly well, without the water heaters or boxes of Christmas decorations. Gaytheist played there recently and set up in the small stairwell that leads to the venue.

Don’t tell anyone about that, though. It’s our little secret.

Hawthorne Theatre is widely regarded as having the worst sound in the city, second maybe to any tiled bathroom anywhere. Maybe.

Unfortunately, the fragile nuances of metal are lost on them. I say that because a lot of black metal sounds like it was recorded in the aforementioned tiled lavatory. The last thing us metal-heads need is a harsh sounding band sounding even harsher because of an inept sound engineer.

Sadly, this seems to happen more often than not. Watain and Behemoth both played there recently—two bands that certainly don’t benefit from any further muddying.

There is plenty good to be said for Portland’s house show scene, but I won’t get into that. What’s not good is that the people who live in these houses (or their friends) often insist on playing, and their bands are usually really awful.

Since there is no security, anyone can just show up and act the fool, and there is a huge variance on timeframe. Some shows might start at 4 p.m. and be over before you would ever expect to show up.

Oftentimes you will be jockeying for space in someone’s leaky basement and getting pushed into someone’s decrepit water heater. While that sounds like one of the most punk rock things ever, it only sounds great on paper until it actually happens. 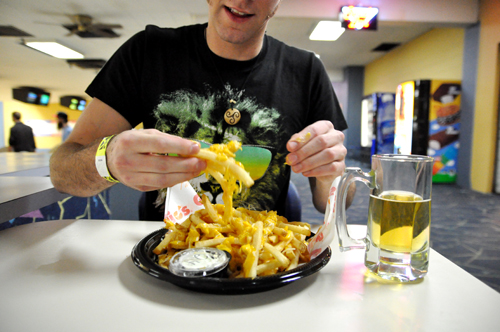 Thin Outside, Fat Inside