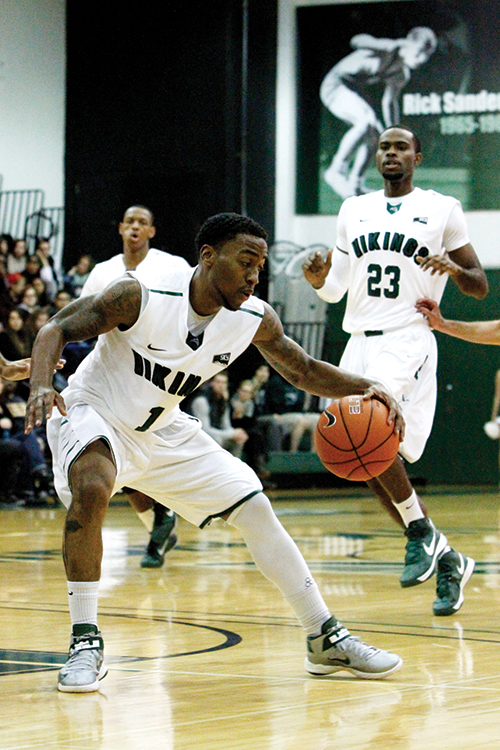 At a loss: The Vikings are still working to find their form in 2012-13.Photo by Karl Kuchs.

The Portland State men’s basketball team heads back to the Stott Center on Thursday after a difficult road trip through Montana last week. The Vikings are now four games into their conference schedule and have dropped the last three in a row. After a solid win over Idaho State University on Dec. 20, the team suffered close defeats to Weber State
University, Montana State University and the University of Montana. Portland State is 3-8 overall this season.

Looking to brush off the loss to Weber State at the end of December, the team traveled to Bozeman on Jan. 3 for a showdown with the Bobcats. PSU trailed for most of the game but kept the score close with a 15-1 run late in the second half, tying the game with three minutes to play. Montana State then regained an eight-point lead with only 12 seconds left before the Vikings rallied back to come within three, but sophomore guard Dre Winston Jr.’s three-point attempt at the buzzer missed the mark and the Bobcats escaped with a narrow victory.

In the second game of their Montana stint, PSU took on the Grizzlies in Missoula. As in their previous game, the Vikings trailed throughout most of the first half and found themselves down by as much as 17 early in the second. They eventually managed to cut the deficit to single digits and were within five points of the Grizzlies’ lead with 15 seconds remaining. That was as close as they would get, however, as Montana hit its free throws down the stretch to take the game 62-55.

PSU has struggled on the road this season, losing all six of their away games in 2012–13 and eight in a row dating back to last season. The Vikings hope to get back on track at home this week against California State University, Sacramento on Jan. 10 and Northern Arizona University on Jan. 12.