When Cicada Zayda moved west to Portland, his life in Akron, Ohio wasn’t the only thing he left behind.

When Cicada Zayda moved west to Portland, his life in Akron, Ohio wasn’t the only thing he left behind. 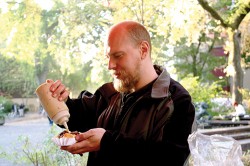 Cicada Zayda dresses a vegan hotdog. All of Zayda’s products are vegan.

The day he moved, he gave up coffee, cigarettes and animal products. The cross-country drive he and a friend made to the Northwest was edgy, to say the least.

The son of a Holocaust survivor, Zayda and his wife, Rocks, are the Park Blocks’ newest food cart vendors.

Settled into a life far removed from his old vices, Zayda and his wife ride to work on a rainbow-colored tandem bicycle and sell vegan hot dogs bedded in homemade organic buns with a choice of vegan mayonnaises.

“My wife, a lot of the time, is like, ‘You have to understand, people are kind of afraid of you,’” Zayda said. “‘You can look big and mean.’”

Zayda, who is playful and chatty with customers, looks anything but big and mean as he tells a customer to hold out a finger to try homemade almond-based cheese sauce.

“I don’t think I’ve ever tasted anything like this,” the customer said, to which Zayda responded by pumping his hands in the air.

Zayda is happy he left Akron behind. “You always have to front in Akron,” he said. “Mad dog, yeah. You have to mad dog people. You can’t be nice in Akron.”

One of those small American towns with little else for young people to do but party and run from the cops, Akron is a place where people get stuck, he said.

“I have a friend that was always like, ‘You gotta get out of Akron,’” Zayda recalled.

“Then one day I was sitting in Akron’s town square when this old guy came up and told me, ‘I always wanted to leave Akron, too, but I never did.’ I thought: This is going to be me if I don’t get out of here.”

A friend of animals who hopes to someday open an animal sanctuary, Zayda throws bits of bread to the Park Blocks pigeons.

“I want people to tell their children to stop chasing the pigeons,” he said. He thinks it scares them, and that pigeons have feelings, too.

“My dream is that, one day, if I get robbed, the pigeons [because I’ve befriended them] will come to my aid,” he said.

Zayda tries to befriend all the creatures in the Park Blocks. “Did you know crows bury things? I never knew that. Oh, and pigeons don’t like blue corn chips,” he said.
Handing a customer a chili dog, Zayda pulls change for a $10 bill from his pocket, where he admits he also sometimes keeps a lucky 20-sided die.

“It’s the stupidest thing. I’m thinking that when I carry it around all day I’m putting my good luck into it and then when I play [Dungeons and Dragons] that luck will come out.”

For months they pushed their handmade cart over the Hawthorne Bridge, Rocks pulling it on the tandem while Zayda pushed from behind.

Having worked his share of mindless jobs, and having turned down an offer to manage Portland’s only vegan strip club, Zayda feels, finally, that the cart business is a fit.

He certainly appears to be in his natural element, chatting up customers and making jokes with people who come over and give him half-hugs like old friends.

“[Rocks and I] are good people that love animals, and, I don’t know, we just want the world to be a better place, and want people to drive less.”

Workin’ for the weekend