Just when you think technology can’t get more convenient, it completely revitalizes and changes traditions ingrained in our society. For decades, adoption was a lengthy process in which years and years might go by before “waiting” parents could actually adopt a baby. 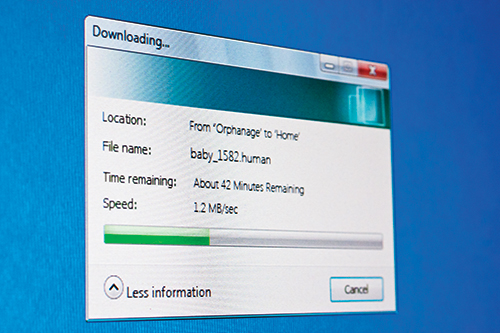 Just when you think technology can’t get more convenient, it completely revitalizes and changes traditions ingrained in our society. For decades, adoption was a lengthy process in which years and years might go by before “waiting” parents could actually adopt a baby.

Until recently, the normal adoptive route included registering with an adoption agency (or agencies), going to seminars on the adoption process and then, maybe, getting matched with a pregnant mother wanting to put her baby up for adoption.

Jumping through these hoops often takes two to three years.

While two to three years doesn’t seem that long, the influx of Internet adoptions is supposedly increasing the wait time. Young mothers opt to use Internet adoption sites over adoption agencies, which makes it that much harder for couples and individuals using agencies to find matches.

It might seem strange to some that in addition to ordering Christmas gifts, paying bills and checking the weather online, we can now browse potential adoptees. While the concept is still a bit foreign, it complements the direction in which our society is moving with regard to technology.

By opting to use a website rather than an agency, a young mother is free to choose whomever she pleases to adopt her child. By using search options, variables such as location and religion can be narrowed to what the mother wants for her child.

Shawn Kane, executive director of American Adoptions, recently told National Public Radio, “For some women it’s very important to have a family that is not around them [sic]. She doesn’t want to have that chance of running into the child or the family later down the road.”

This is a very plausible concern for a young mother, and one that many localized adoption agencies have a harder time working around.

The advent of Internet adoptions isn’t just useful for the mothers, either: It’s also a great way for prospective parents to “sell” themselves. Couples and individuals looking to adopt can create their own websites or Facebook pages that show what they want their target audience to see.

It’s really great that the Internet provides a platform for prospective parents and mothers to find each other, but at the same time there are many risks.

An adoption agency uses screening processes that prospective parents and mothers must go through in order to determine matches, safety, et cetera. Only after screening are the prospective parents and mothers allowed to meet and make decisions. Choosing the Internet over agencies is cheaper and may get you a baby faster, but it runs a high risk of not being as safe or as successful as the traditional agency.

Remember in the early 2000s when MySpace erupted and all those weird identity scams came out? People were pretending to be younger, older or completely different from what they were in real life, and they were getting in a lot of trouble for it as more and more cases came out.

Not to be paranoid, but who’s to say that prospective parents aren’t doing the same thing? That’s a little far-fetched, as most mothers looking to adopt via the Internet are still doing so through use of an Internet adoption agency, but it’s still a scary thought.

Other than being overly paranoid about the Internet, there doesn’t seem to be anything wrong with Internet adoption. If that’s the route a couple, individual or mother chooses to take, then they should proceed with caution, but that’s also something they should be doing in every facet of their lives.

There are pros and cons to both adoption agencies and Internet options, but when the resulting situation could be a baby going to a loving home, there shouldn’t be any issue with the influx of technology. When it comes down to it, the decision lies with those individuals involved—outside opinions become null and void.

The Internet is indeed a strange entity. The things we can do with it are amazing and ever-expanding, and new applications are being created every day. The idea that prospective families can now come together via the Internet is both beautiful and disconcerting at the same time.

However, this needs to be taken with a grain of salt. Just because using the Internet to come together as a family works for one person does not make it the norm for everyone else.

Technological advances are completely redesigning the way we think about and view “family.” It seems crazy that we’re living in a time where a new family member could be just a click away, but that’s the reality of it. The best thing we can do is approach these advances with open acceptance and caution.

Security in the flesh

You want to major in what?