Women of Color Zine Workshops teach participants to express themselves

Tonya Jones started the Women of Color Zine Workshops four years ago to “provide a creative space for women of color in Portland.

Women of Color Zine Workshops teach participants to express themselves

Tonya Jones started the Women of Color Zine Workshops four years ago to “provide a creative space for women of color in Portland. 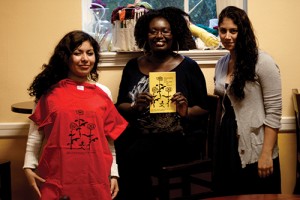 Zinesters Isabel Ortiz Ornelas, Tonya Jones and Vanguard columnist Shilpa Esther Trivedi are all involved in the Women of Color Zine Workshops, which Jones founded. The group meets every Friday at the Women’s Resource Center.

“The workshops cover different topics, such as ‘zines 101,’ writing activities, [sometimes accompanied by] guest speakers,” Jones said. “Overall, it’s really just an opportunity to make new friends and a place to relax and have fun.”

Jones is associated with PSU’s Women’s Resource Center and the mission, according to the WRC’s website, to advocate for “the best educational and campus experience for all members of our community,” by “advancing social justice, ensuring access to personal empowerment for all self-identified women, and by working toward a safe and healthy campus.”

In order for Jones to encourage women of color to get involved in zines and do-it-yourself culture, Jones uses the words of an admired Portland activist, PSU Black Studies professor Walidah Imarisha, who once spoke at one of the zine workshops.

“She noted that, as people of color, we have always had to use alternative forms of media to get our voices heard,” Jones said, “creating our own newspapers, journals and books; self-publishing is a part of our history as women of color.”

A fellow woman of color, longtime zinester and author of the zine All This is Mine, Sugene Yang-Kelly views making a zine as a “self-indulgent” activity.

“It’s just a fun, personal outlet, and I’m not trying to reach a wide audience or impress anyone or change people’s minds,” Yang-Kelly said. “It’s a bonus if other people want to read my zines and have a conversation about it.”

Yang-Kelly became involved in zines after heavy participation in her school’s newspaper and art and literary magazine. She began production of her zine after the school newspaper censored an article of hers.

Yang-Kelly and a few others decided to publish and distribute the article themselves, free from the constraints of the school’s publications.

“I didn’t even know what zines were when I first started making them,” Yang-Kelly said. “It was exciting to discover there was a whole community out there, and I was happy to be a part of it.”

The Women of Color Zine Workshops are ongoing and held monthly (except in December, January and March), in the WRC. The workshop meets on a chosen Friday of that particular month from 5:30 to 7 p.m.

Supplies and snacks are provided, and the workshops are open and free to individuals who self-identify or live as women of color.

Led by Olivia Olivia, one of the group’s members, the focus for the upcoming meeting will be on letter-writing.

“Confessions are the beginning of a story you’d never think you could tell. This workshop will explore the deeper and darker side of letter writing, secret-telling and memoir,” Olivia said in an email. “Telling our own stories on paper might be a good way to start writing letters ‘we’d never send’ and turning them into ‘stories we decide to share.’”

Noting the much ado