On Feb. 18, President Bush gave corporations what will be one of their most prized possessions for years to come: "tort reform." Much like "social security reform," the bill he signed into law protects corporate profits at the expense of the citizen.

Let’s say you took Vioxx for arthritis, as prescribed by your doctor. Unknown to both of you, Merck, the pharmaceutical giant that produces this drug, already knew that it significantly increased the risk of heart disease. You and your doctor are both aware of the history of heart disease in your family, and had you been furnished with more information, you would have taken something different, maybe generic. Effective and cheaper for you, but not nearly as much of a profit for Merck.

Well, now that the information has come out that Merck deliberately misled consumers and doctors to make a buck, it seems only fair that you and all the other people misled by this unethical giant should have your day in court.

Bush just made it likely to never happen. With the so-called "Class Action Fairness Act," none of the more than 600 lawsuits pending against Merck (which gave $365,854 to Republicans in 2004) will be heard in a state court, if more than a third of the plaintiffs are not from the same state. Vioxx was distributed nationwide. The case can only be heard in a federal court, which will take years longer, and is much more friendly to business interests.

Meanwhile, with class-action suits moving to the already-clogged federal docket, corporations will be freer to pollute the nation’s waterways with toxic chemicals and sell us products that they know will likely kill us, with little to no fear of punishment. It’s just business, after all.

Helen Gonzales of the consumer advocacy group USAction said it best when she characterized this law as Congress’ "clear message to the nation: the rights of large corporations that take advantage of seniors, low-wage workers and local communities are more important than the rights of average American citizens."

Why would the United States be any different, when run by a one-party government with George Bush at the helm? We are moving back to the robber-baron days of industrialism, where the rights of business trump the welfare of the individual.

State initiatives to pass "tort reform," a reclassification of laws and penalties that corporations are subject to, have led to a conclusion opposite than expected (as often happens when purchasing state policies from corporations). In Ohio, Texas, Florida and Oklahoma (corporate-loving red states, mind you) 2003 statewide "tort reform" referendums for medical malpractice cases were passed, and applauded by corporate interests. Since then, malpractice insurance premiums have risen 35-83 percent in all four states.

Any bill supported by corporations, and Republicans, does not have the welfare of the people in mind. Its purpose is, by nature and bribery ("lobbying"), to make corporations more money. Never forget, the whole reason that Republicans (and many Democrats) are in the federal government is because of their subservience to corporations.

If this bill was really to stop predatory lawyers, like that evil John Edwards, from making a bundle by finding friendly jurisdictions in which to hold their cases, why not cap the amount a lawyer can take from the settlement? This bill was described as ethical because it keeps smarmy lawyers (and who doesn’t know a good lawyer joke?) from preying on innocent corporations. If that is the ethical goal, limit the attorneys directly.

But the goal was blatantly unethical. The goal was to protect corporate interests. Not the interests of the small business owner with a hardware store on Main Street, but the interests of the huge corporate conglomerate that does not pay any taxes, gets millions in taxpayer subsidies and bribes our politicians yearly. This bill was payback to Merrill Lynch, Southwest Airlines, Wal-Mart, SBC Communications, Clear Channel, General Electric and the hundreds of other corporations that poured money into the 2004 Republican election coffers. They paid for their politicians, and any corporation worth its salt gets a good return on its investment. 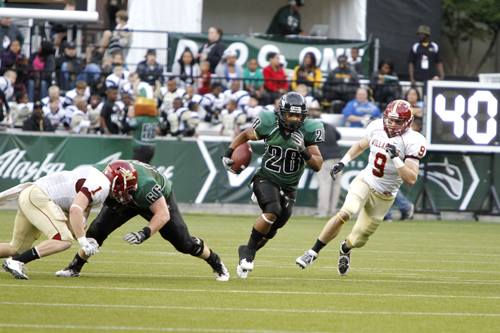 Vikings prepare for biggest dam game of the season