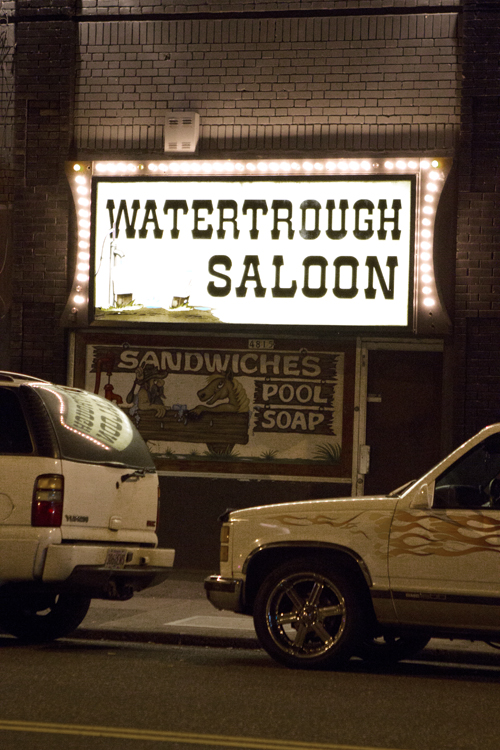 Couldn’t afford a plane or bus ticket home? Looking for a place to stew in your own depressing juices for the holidays? Here at the Vanguard, we’ve got you covered.

Couldn’t afford a plane or bus ticket home? Looking for a place to stew in your own depressing juices for the holidays? Here at the Vanguard, we’ve got you covered.

Few places are more depressing than a bar that looks like an airbrushed-van–era rumpus room with no windows. To be sure, Watertrough has stepped up its game in recent years with the welcome addition of a pinball machine, but that doesn’t help the whole “no windows” thing. In fact, the one spot in the building that could conceivably accommodate a window has, instead, a painting of a horse taking a bath in a trough with a seedy cowboy-type.

As you may know, all bars in Oregon are required to serve hot food if they also serve spirits. Watertrough offers an array of hot dogs and other customary American cuisine, but by far the most bewildering item on the menu is “cheese and crackers”—and it costs roughly three bucks.

Now, if only hot food is required by law, why sell cheese and crackers as a vanity item? Is it the chef’s special? Is the proprietor of the Watertrough an expert cheese-and-crackers chef gone rogue? Either way, when I ordered the cheese and crackers on one trip, the surly old booze-slinger told me to help myself to some “penis.” No joke.

Fun fact: At the west end of the Watertrough’s bar, you may notice that the lacquer is in the silhouette of a human. You would not be wrong. A lifelong patron of the Watertrough went there every day for years, and always sat in the same spot, smoking. When he finally stopped coming in, he had left a permanent silhouette on the wall.

What’s this, a legitimate “old man” bar right next door to Matador? Yes, that’s exactly what it is. Most people from Portland proper are confused by the idea of an old man bar, because they usually reside in either the suburbs or small towns.

Tony’s is an oasis in the area that has an overabundance of freshly 21-year-old bars such as Marathon and Bitter End.

Tony’s is a nice throwback, where they keep the oldies bumping and the Hamm’s flowing. Ninety percent of the menu is fried goods, there are ample lottery machines in the back and the shoebox-like interior is lined with old red booths, smoky-tavern style.

While all of this sounds pretty awesome, the bar’s atmosphere bar is soul-crushingly depressing around the holidays. Look around: You’re sitting in a dingy room with a bunch of people that are old enough to have families. When you think about why all those people are there with you at this time of the year, the depressing thoughts start to pile up rather quickly.

While this isn’t so much of a depressing bar (if only because of the in-house entertainment), when you’re in your late 30s and you’re recanting to loved ones about holidays past, Jiggles will be there to drive an icy spike into your heart. And it’ll stay there, year after year, story after story. You’re going to have to tell your kids and other impressionable family that you spent the holiday season in a place called Jiggles.

For you uninitiated readers, Jiggles is a beacon of a strip club. It sits on a bluff overlooking I-5 and is the unofficial “now leaving Portland” sign, because no matter how early you leave on a road trip, and no matter how tired you are, the very idea that a strip club exists with a name straight out of Married with Children is guaranteed to make you laugh.

Because Jiggles is both Portland’s unofficial exit sign and a citywide laughingstock, spending an evening inside during the holiday season is tantamount to listening to Elliot Smith in the bathtub. Not only are you hanging out near the Portland exit instead of with your loved ones—you’re inadvertently being laughed at by everyone driving home to be with their own loved ones. Don’t be that person. 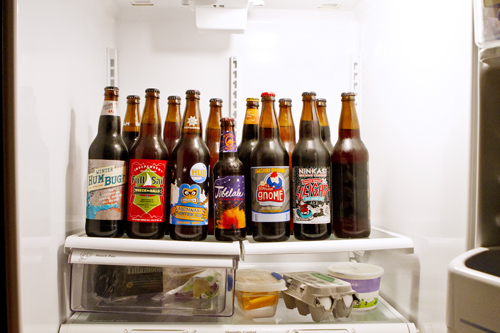 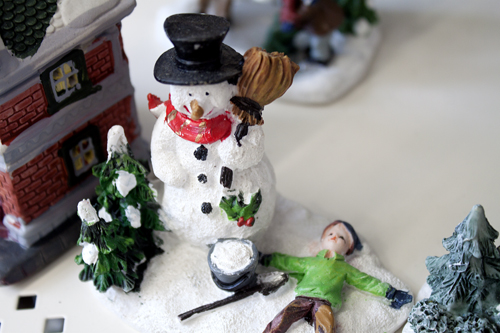