On a dark, rainy Tuesday, the Associated Students of Portland State University senate convened. The hottest topic on the agenda: the Campus Public Safety Office.

On a dark, rainy Tuesday, the Associated Students of Portland State University senate convened. The hottest topic on the agenda: the Campus Public Safety Office. 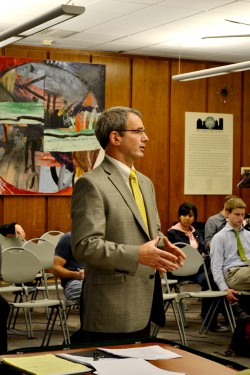 During the meeting, CPSO presented its case to the senate for creating a campus police force, a proposed conversion of some its force to “sworn” police officers who undergo a 16-week police academy training.

While PSU administration shows early support for the idea, the school’s student government has concerns about the program’s potential costs, and arming the officers with guns.

The change would give CPSO officers the same enforcement powers as sworn police, beefing up the current enforcement model, which CPSO says is inadequate. 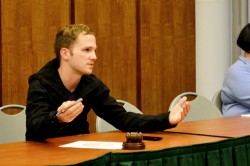 Currently, CPSO operates with 14 officers, the same number it has had since 1974. CPSO Chief Phillip Zerzan said the current demands on his staff can, at times, outweigh their abilities. There are large gaps in police services that CPSO needs the Portland Police Bureau to fill—including serving warrants, mental health holds and community caretaking.

For the 29,000 students at PSU, PPB only has two officers assigned to cover the campus, Zerzan said.

Zerzan argued that the function of campus safety is fundamentally different than a police response, but that currently, his officers are lacking the authority to respond to all types of situations. With a campus police force, he argued, PSU could have a more sensitive response.

He described a situation where one of his officers spent two hours with a student who had a history of mental health problems. The officer helped the student navigate the paperwork and structure of the Center for Student Health and Counseling to get the help that they needed.

“The cops wouldn’t do that,” he said.

Monica Rimai, vice president of the Office of Finance and Administration was on hand to make comments. She echoed Zerzan’s sentiment that officers’ functions could be expanded with more authority.

“Campus safety is somewhere between a police officer, and a social worker,” she said.

Rimai’s office, which oversees CPSO, would like to be able to make a recommendation for action by the end of the year, although there are no official deadlines.

“It’s the start of a conversation,” she said, “and that’s all it really is.”

Rimai said most people would like a safer campus.

“But what we don’t agree on, is how we get there,” she said.

Previously, there has been apprehension among members of ASPSU regarding the proposed changes, particularly centered around the issue of whether CPSO officers will be carrying guns.

When posed the question of whether he supported having his force armed, Zerzan replied: “I favor a police department. Police officers in Oregon are armed.”

ASPSU President Tiffany Dollar raised two concerns. She voiced the apprehension that working for a campus police department may not be the most desirable job for candidates fresh out of the police academy, and that PSU may have inferior officers compared with traditional police bureaus.

Zerzan replied that when he began as head of the Oregon State University campus police force in 2002, turnover was high. However, by the time he left his position in 2007, there were no transfer requests because of adjustments he had made. He did acknowledge, however, that there will be some movement among the force.

“It can be a good place for rookie cops to start,” he admitted.

Dollar was also concerned that increasing the authority and scope of the force would be expensive. “Students pay 80 percent of the operating cost of the university,” she said. She was concerned how the changes would affect tuition. Zerzan was unclear about the exact cost of the changes, estimating that it might raise the annual operating cost of his department by roughly two million dollars, from the current $1.9 million cost.

According to Zerzan, the changes to CPSO already have the support of the Women’s Resource Center and PSU’s Counseling and Psychological Services.

He stated that if it were up to him, the changes would happen tomorrow, but more realistically, “This will take years,” Zerzan said. “Universities move very slow.”

Currently, the university affairs committee of ASPSU will begin investigating the issue, and ASPSU has previously stated that it has plans to poll the student body for opinions.