Katherine Fenton isn’t a feminist—are you?

Most of us have heard about Romney’s “binders full of women” and seen the data proving Romney didn’t actually compile said binders and, furthermore, that his record of hiring women was actually quite poor.

A WOMAN’S RIGHT
By Shilpa Esther Trivedi
Katherine Fenton isn’t a feminist—are you?

Most of us have heard about Romney’s “binders full of women” and seen the data proving Romney didn’t actually compile said binders and, furthermore, that his record of hiring women was actually quite poor. 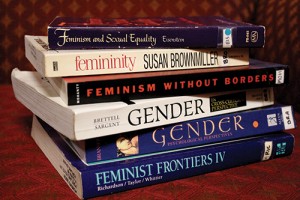 It isn’t like that was anywhere near the biggest lie he told at the debates.

What about the woman who first asked the question about workplace inequalities? Not much has been said about her.

Katherine Fenton is a teacher and undecided voter who believes in “women’s equality in the workplace” and said she’s “protective of [her] reproductive rights.” She’s worried about the economy and is grateful that she was able to stay on her parents’ health insurance thanks to the Affordable Care Act.

She’s also been widely attacked by conservatives, and slut-shamed for posts on her Twitter feed indicating she enjoys the occasional drink. All things considered, she resembles the typical female voter.

Oh, and one last thing: She’s publicly declared she’s “absolutely not” a feminist. She said, “I’m a 24-year-old woman that lives in the United States and feels like I should be treated the same as anyone else. That makes me a normal human being.”

I’ve heard the same thing in classes here. Even in women’s studies classes or in response to lectures on feminism, women begin comments by saying, “Well, I’m not a feminist, but…” And it’s not just at Portland State—recent data suggests 71 percent of women don’t self-identify as feminists.

Do self-hatred and internalized sexism really go that deep?

These women frustrate me. They sure seem to think they ought to have the right to get an education, to vote, to sit at a table alongside men, to wear what they want, to earn equal pay for equal work and, most importantly, to express their own unique opinions.

At the very least, I wish they’d realize that by disavowing feminism they’ve failed to recognize that they stand on the backs of giants who fought hard-won battles for their right to have a voice—the same voice they now use to rail against feminism.

We should thank early feminists for so many things: parental rights after a divorce, birth control and the ability to own property, drive a car or consent to sex.

Feminism means you believe in equality for all genders. It ought to be a pretty simple concept, and while I have some criticisms of the feminist movement, the basic tenet—that women deserve equality—has not changed.

Caitlin Moran, a very funny albeit occasionally problematic feminist, has a great response to women who rush to separate themselves from feminism. She points out in her book How To Be a Woman:

“Here is a quick way of working out if you’re a feminist. Put your hand in your underpants.

a. Do you have a vagina? And

b. Do you want to be in charge of it?

If you said ‘yes’ to both, then congratulations! You’re a feminist.”

While Moran’s definition is limiting—genitalia doesn’t always determine gender and you don’t need to self-identify as female to be a feminist—the image she conjures serves as an apt response to women who disavow feminism.

Fenton’s declaration certainly seems to indicate a skewed definition of the term, since she implies feminism has nothing to do with equality and is something abnormal.

When a woman asked a question about equal pay at a presidential debate, even though she was quick to separate herself from feminism, she was still harassed for being a “party girl” and was called names like “feminazi.”

It’s exactly because of this negative treatment that we still need feminism.

Everyone—of any gender—needs to think before rushing to be separated from “feminism.” Declaring you aren’t a feminist merely cedes power to a conservative movement that’s spent the last 40 years trying to make feminism a bad word.

I’d like to echo a few other feminists who, after Fenton’s claim, merely smiled and said, “I’ll still fight for her rights, even if she doesn’t think she needs me to.”

A quick look at two of Portland State’s volleyball players