A 45-foot long mobile television studio that has been following the presidential campaigns across the nation is stopping by Portland State tomorrow, as part of C-SPAN’s effort to track the developments of the 2008 presidential race.

A 45-foot long mobile television studio that has been following the presidential campaigns across the nation is stopping by Portland State tomorrow, as part of C-SPAN’s effort to track the developments of the 2008 presidential race.

The two C-SPAN Campaign 2008 buses were created to report on the presidential races and gain an understanding of people’s feelings about politics in different locations around the country. The first bus has been traversing the states since January 2007, with a second bus joining the tour in January of this year. Together, the two buses have visited 71 universities and 29 state capitals, according to www.c-span.org.

The buses work as traveling production studios, able to tape live interviews and work as multimedia centers that promote the work C-SPAN has done in its coverage of the 2008 primaries and the upcoming November elections. The buses were established in 1993 and originally used to educate communities, primarily students, on current public affairs that C-SPAN covers.

C-SPAN, the well-known political cable network, was created in 1979 by cable companies to work as a public service. It now operates three different channels: C-SPAN, C-SPAN2 and C-SPAN3.

The centennial event, hosted by the PSU group Friends of History, will take place in the Vanport Room (room 338) of the Smith Memorial Student Union. After a brief reception, Baldwin biographer and PSU alumnae Gloria Myers will give a presentation on Baldwin during the program. The event is free and open to the public.

The Oregon Liquor Control Commission is threatening to revoke the liquor license for the local business Greek Cusina, after the OLCC issued a notice of several alcohol-related violations, including bar brawls and noise complaints.

The owners of the Cusina, Ted Papas and John Papatheodorou, have until April 10 to respond with a request for an appeal to the proposal. Janice Kindrick, OLCC Regional Enforcement Manager, said she anticipates that the Cusina’s owners will make an appeal, which she says may not be scheduled for months once the request has been received. In the meantime, the Cusina will continue to serve alcohol. 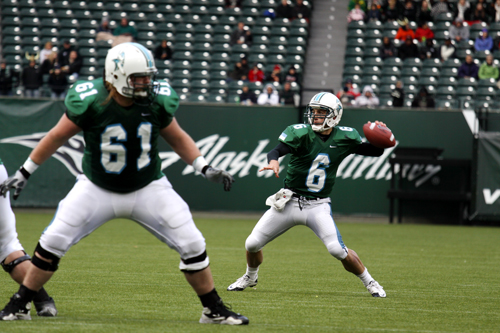 The end to a storied season