In the aftermath of the horrific shooting at Connecticut’s Sandy Hook Elementary School and the tragedy in our own Clackamas Town Center, many Americans are considering pushing anti-gun laws to prevent such atrocities from occurring again. 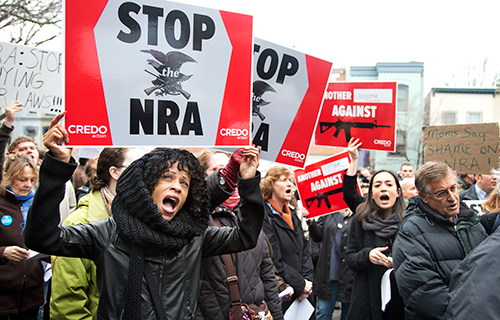 In the aftermath of the horrific shooting at Connecticut’s Sandy Hook Elementary School and the tragedy in our own Clackamas Town Center, many Americans are considering pushing anti-gun laws to prevent such atrocities from occurring again.

While the heartache is still raw and the anger is still smarting, it’s important that our nation look at this issue rationally in order to confront this violence in the most effective way possible.

Gun control seems to bounce in and out of the media in sensational bursts of opinion, conjecture and excitement. The complexity of gun control is, however, an issue often distorted by abused statistics, unquantifiable variables and extreme emotion.

It might seem that making guns illegal would lower gun crimes but, unfortunately, we live in a world where bad people don’t follow the law.

In Washington, D.C., for example, a decades-long handgun ban hasn’t demonstrated any definitive evidence that making guns illegal will stop people from killing each other. Crime has actually increased since the ban, though statistics don’t account for a slew of variables like the drug market, changing demographics and economic conditions.

Professor Gary Kleck, from Florida State’s College of Criminology and Criminal Justice, compared the trends in D.C. to Baltimore, Md., a very similar city. His research found that both cities imitated each other in violent crime and that D.C.’s gun ban didn’t reduce homicides.

Quite a few anti-gun lobbyists are pushing for banning what they call “assault rifles,” a term that doesn’t actually have a technical definition and means different things to different people. Usually, it refers to semiautomatic and automatic rifles that can shoot several rounds before needing to be reloaded.

A similar law has existed in the past. From 1994 to 2004, it was illegal in the U.S. to manufacture certain types of semiautomatic weapons, automatic weapons and magazines that could hold more than 10 rounds, like the AK-47.

The Centers for Disease Control and Prevention created a task force to determine the effectiveness of the ban, but found insufficient evidence to say it prevented violence.

Another problem with laws that specifically target assault rifles is that, despite the traumatic shootings we’ve had this year, handguns are used far more frequently in violent crime. More handguns have been used in mass killing sprees than semiautomatics, probably because it’s not that difficult to switch out a magazine and continue to shoot.

To confound all this, there is so much misinformation about guns that it’s nearly impossible to have an objective conversation about them. Many people don’t understand basic gun terminology—like the differences between a semiautomatic and an automatic gun, or that “clip” and “magazine” are not synonymous.

While it’s not important for most Americans to have a grasp on gun anatomy, anyone arguing over what should and shouldn’t be banned needs to understand the basic concepts.

There are also quite a few opinionated anti-gun arguments that don’t make much sense.

The belief that people don’t ever “need that type of gun” may or may not be true, but it shouldn’t be used as evidence for why something should be illegal. I have plenty of things I don’t need but enjoy having, like the four-inch heels in my closet or that plate with Captain Picard’s face on it.

We enjoy hobbies that are sometimes dangerous, and we seem to keep plenty of them around because we can. Swimming pools are a huge cause of unintentional deaths of infants and children under 14 in the U.S., and removing them could potentially prevent the deaths of far more children than a gun
ban would.

If our ultimate goal is to save lives, we could start by banning private swimming pools and creating pool-control laws for public safety. Obviously there are major differences between accidental drowning and violent homicide, but both result in death. If anything, the risk swimming pools pose is a simpler problem to solve, yet we choose to ignore it in our society because it’s not as exciting and emotionally charged as a public shooting.

Solving violent crime in our society is going to take a lot more than banning a few guns. If we are interested in actually making a difference, we need to stop blaming an inanimate object and start blaming the evil people that perpetrate these crimes, and find the reasons in our communities that create crime.

Would legislation banning assault rifles have prevented the Connecticut shooting, or at least limited the destruction of life? Who knows?

It was a bizarre anomaly perpetrated by a disturbed individual whom we can’t possibly understand.

If your end goal is to decrease violent crime, though, banning guns isn’t the answer.

Pros and cons at PSU

A nation of Bacon infatuation