When Quentin Tarantino appeared on The Late Late Show with Craig Ferguson to promote his new movie Django Unchained a couple weeks ago, Ferguson began the interview by remarking on Tarantino’s casual wardrobe, calling it a return to “video store chic.” It was a funny reminder of the legend of Tarantino, which, more than two decades into his career, I think people tend to forget. 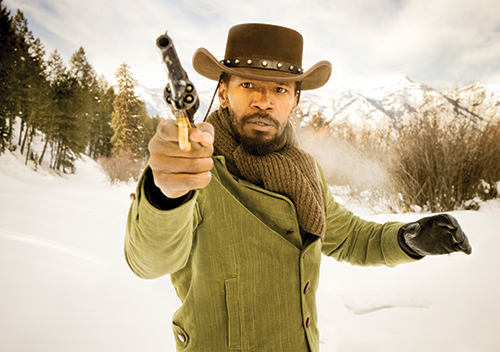 The fastest gun in the south: Jamie Foxx stars as the titular character in Quentin Tarantino’s most recent revenge blockbuster, Django Unchained. Look for Leonardo DiCaprio as a sadistic slave owner. Photo courtesy of Columbia pictures

When Quentin Tarantino appeared on The Late Late Show with Craig Ferguson to promote his new movie Django Unchained a couple weeks ago, Ferguson began the interview by remarking on Tarantino’s casual wardrobe, calling it a return to “video store chic.” It was a funny reminder of the legend of Tarantino, which, more than two decades into his career, I think people tend to forget.

Back in the late ’80s, Tarantino really was a video store clerk. It seems unremarkable now, in the age of YouTube and the iPhone, when pretty much anyone can make a film and distribute it. But before the Internet, Tarantino was a novelty. He demystified filmmaking in a way that was rare.

Tarantino was just a geek—a major fan of ’70s gangster, “blaxploitation,” spaghetti western and kung fu films—who wanted to make movies that contained everything he loved about cinema. In that way, he was ahead of his time.

Tarantino’s second and arguably most famous film, 1994’s Pulp Fiction, is on the short list of movies that legitimately changed my life. It wasn’t so much the content as the incredible, visceral feeling of watching it. I never knew movies could be like that.

One of the legends surrounding the film involves a woman who passed out during a screening when John Travolta’s character stabs Uma Thurman’s overdosing moll in the heart with an adrenaline needle. To me, that was a symbol for the entire movie—a shot of adrenaline to the heart, set in a ludicrous fantasy world of thrilling proportions.

I saw it five times, bought the screenplay and read it over and over, discovered his first movie, 1992’s Reservoir Dogs, and became a Tarantino aficionado who dreamed of being him when I grew up. I was 13 years old.

I mention this only because I’ve been mulling over some of the Internet discussions about Django Unchained, Tarantino’s most recent film, which tells the story of a slave, played by Jamie Foxx, who is freed by a German bounty hunter, played by Christoph Waltz.

It’s a spaghetti western that takes revisionism to a whole new level, in the vein of 2009’s Inglourious Basterds, and a lot of people don’t think teenagers should see it. As in, ever.

I was lucky enough to have fairly progressive parents who didn’t place many restrictions on what I watched and gave me the freedom to explore my voracious love of film. I understand that not every kid can or should be afforded this freedom, but the discussions about it fascinate me.

Entertainment Weekly actually published an article on the “Family Room” section of its website in which author Abby West fretted over the idea that her teenage son might want to see Django
Unchained. The comment section is rife with people demonizing anyone who would let their
high-school-aged kids watch a Tarantino film. And, even better, those who think Tarantino should not be making films at all—that he is a garbage-peddler, a sociopath and a bad person.

There are plenty of good, nice things to make films about, these folks argue, so shouldn’t everyone be making those instead, just in case?

The “just in case” here is a reference to the tragic shooting in Newtown, Conn. a few days before Christmas. It’s a subject I don’t feel qualified to speak about, especially because so much has already been said.

I believe in gun control, but I’ve also never owned a gun, and I can respect that some people value them. But what I can’t fathom is the National Rifle Association blaming violence in the media for this overwhelming tragedy, to deflect attention from, you know, the actual weapons.

Tarantino’s films are undoubtedly violent, and the violence is often filmed with audacious glee: He presents you with shocking and violent situations and then dares you to laugh, pushing the boundaries of entertainment. Like the films that inspired him, Tarantino lacks any sense of political correctness or the obligation to have a moral to his story. Tarantino’s earlier films, especially, are pure, meaningless fantasy—filmmaking for filmmaking’s sake.

There is absolutely no connection between Kill Bill and reality. And the idea of blaming Tarantino for somebody thinking that there is seems archaic and ridiculous.

Of course, times have changed for both
Tarantino and his audience. Inglourious Basterds is considered by many to be his greatest film, and despite my teenage loyalty to his first two films, I definitely agree.

Basterds marked a shift for him as a director, when the master of modern pulp filmmaking decided he might actually have something to say. There have been literally hundreds of movies made about World War II, but only Tarantino could make a highly charged, bombastic Jewish revenge fantasy that culminates in a French-Jewish woman burning down a cinema full of Nazis with celluloid film while American Jewish soldiers gun down Hitler and Goebbels.

Basterds uses cinema as a literal weapon in a sort of self-referential cycle that is both classic Tarantino and deliciously new. He says that not every artistic vision of the Holocaust has to be a somber, three-hour, documentary-style diatribe. Why can’t we look at history for what it really means instead of what literally happened? Why can’t we dissect the darkest parts of humanity and be empowered by them?

Which brings us to Django Unchained.

Obviously, there are more issues raised by the film than just violence. Filmmaker Spike Lee has famously denounced it on Twitter, saying that depicting slavery in the context of a spaghetti western is an insult to his ancestors.

Many critics have voiced concerns about racial slurs and other racial elements of the film, which seems misguided to me because the film is being attacked from both sides: Either it’s not historically accurate enough—too sensationalist, too fantastical to deal with a thorny issue like slavery—or critics are worried about the depiction of racism. (Because making a film about slavery in the pre-Civil War South while leaving out racism sounds like a great idea.)

Like every Tarantino film, Django is unflinchingly brutal, but the film delves into the historical atrocities of its time even more than Basterds did. Although the story is fantastical, it’s a shame that Lee didn’t actually watch it, because I found it to be unsparing in its portrayal of the horrors of slavery. And, unlike with the Holocaust, there isn’t a long line of films attempting to do that.

Is Django a great film? It’s pretty great. Is it the masterpiece that I consider Basterds to be? Not really.

Django is much thinner overall and lacks the more coherent storytelling of Basterds. But it is an entertaining mash-up of amazing performances, memorable moments and powerful ideas about freedom, revenge and morality.

The film is also full of Tarantino’s trademark dialogue, which he deserves to be known for much more than for his violence; I consider it a flaw in American culture that he isn’t. The relationship between Foxx’s Django and Waltz’s King Schultz is dynamic and interesting, and it’s nice to see Leonardo DiCaprio really act again—it’s his best work in years.

The ironic thing about movies like Django and Basterds is that, from a certain perspective, they could be seen as NRA fantasy movies, based on the same logic that the members of that organization often use. What if American soldiers infiltrated a Nazi cinema with guns? We could have killed Hitler! What if freed slaves came back for revenge, with guns? We could have defeated Confederate plantation owners!

I can’t stop thinking about this line of reasoning whenever I hear people advocate for armed guards in elementary schools or teachers with handguns in their desks. The same people who don’t want you to see Tarantino films want to make his ideas a reality. They should already know that the revenge fantasy is just as violent as what actually happened.

Tarantino’s last two films tap into something relevant about how we view history. We always talk about remembering the heroes, whether in times of mass shootings or mass genocide. But heroism isn’t always black and white—it’s brutal, it’s violent and it often comes with great sacrifice.

Tarantino himself has said that he finds it cathartic to portray the people historically seen as victims as the victors and avengers of the story. In today’s culture, the concept of violent revenge is shied away from, looked down upon—and, for the most part, rightly so.

But in films, especially those that deal with the violence of history? It’s OK to revel in the fantasy. Django Unchained might be imperfect, but it’s a fitting advance for a celluloid-geek-turned-genius.

Two decades ago, who would have thought Tarantino could be righteous?

Southeast Powell is a salaryman’s delight