As soon as the season began, the Portland Trail Blazers found themselves faced with an uphill climb. A young team with very little experience would be put to the test against the likes of San Antonio, Oklahoma City and the Los Angeles Lakers and Clippers in their first 12 games, with a seven-game road trip looming after that. Fans knew the season could very easily get out of hand.

As soon as the season began, the Portland Trail Blazers found themselves faced with an uphill climb. A young team with very little experience would be put to the test against the likes of San Antonio, Oklahoma City and the Los Angeles Lakers and Clippers in their first 12 games, with a seven-game road trip looming after that. Fans knew the season could very easily get out of hand. 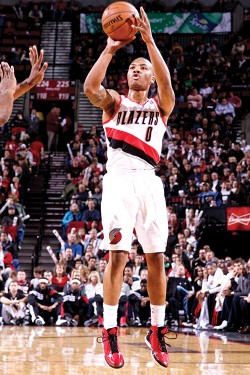 Learning on the job: Damian Lillard is pulling his weight in his rookie season.

Making it through that first stretch with a 6-6 record, bruised slightly but with a few solid wins to their credit, the Blazers have come together to do a pretty decent impression of a playoff team. Rookie Damian Lillard isn’t playing like one, leading the team (and all rookies) in scoring and assists while directing the offense to several late-game victories. LaMarcus Aldridge and Nicolas Batum have been solid in the frontcourt as expected, with Batum in particular taking on an increased amount of responsibility, and the team is playing with a level of chemistry unseen in recent years.

But despite the inspired play of the starters thus far, the roster isn’t without some major issues. Portland’s bench, which has offered little to no help this season, will need to provide the team with more consistent production going forward. As the season wears on, having a reliable group of players to turn to when the starters run into trouble will become more and more important if the Blazers hope to come out of the Western Conference with one of eight playoff spots in April.

The climb will continue to be a steep one. Although they’ve struggled a bit to find their rhythm after the departure of James Harden, the Thunder are off to another strong start, and it’s only a matter of time before a deep and dangerous Denver Nuggets squad finds the right formula to cause some serious trouble in the Northwest Division. The Blazers will have to be prepared for those games when their go-to players are getting mobbed by the defense or just having an off night.

There is a lot of season left to be played, though, and general manager Neil Olshey should be active around the trade deadline to import some bench help. And if the team continues its current level of play, Portland may also prove to be an attractive destination for free agents. A few roster moves could be just what it takes to bring the Blazers to the next level.

Regardless of their record and position in the standings, there is no doubt that this team is incredibly fun to watch. Lillard has transitioned nicely to the NBA game and already handles himself with the calm confidence of a veteran. Wesley Matthews has improved his game on both offense and defense.

Batum is making strides in his career and is living up to the contract extension he signed in the offseason. Aldridge is still shooting a few too many jump shots, but is finding a way to put up strong numbers on the offensive end, and J.J. Hickson has come up big on the glass, averaging a double-double in the middle.

If the Blazers’ front office can find a little help for a starting lineup that is quickly figuring out how to compete against the toughest teams in the league, Portland might just have a chance to cash in on something other than the NBA lottery this year.