One thousand students celebrate a national day of service

According to Oregon Campus Compact’s final count, the Martin Luther King Jr. Day of service event held on Monday, Jan. 16, united 1,000 student volunteers from nine Portland area colleges at Roosevelt High School. According to an article in The Oregonian, Emily Gilliland, the ORCC’s executive director, said the event at Roosevelt was the largest student mobilization in the country on what is considered to be a national day of service.

One thousand students celebrate a national day of service

According to Oregon Campus Compact’s final count, the Martin Luther King Jr. Day of service event held on Monday, Jan. 16, united 1,000 student volunteers from nine Portland area colleges at Roosevelt High School. According to an article in The Oregonian, Emily Gilliland, the ORCC’s executive director, said the event at Roosevelt was the largest student mobilization in the country on what is considered to be a national day of service.

ORCC, the non-profit consortium that organized the event, aimed to attract 1,200 volunteers, and while the actual numbers fell just short of their expectations, those 1,000 volunteers were able to complete the projects that ORCC set out to accomplish that day. Volunteers cleaned and beautified the campus, contributed to an oral-history project, taped hand-made signs bearing messages of encouragement to every locker in the school, and had time left over to contribute decorations to the school’s anti-bullying campaign that begins next month.

ORCC chose to consolidate their efforts at Roosevelt in order to bring attention to Dr. King’s commitment to education as a civil right. McKenzie Miller, communications coordinator at ORCC, was pleased to see the energy that the college students brought to their work on Monday.

“Folks really got involved,” Miller said. “The day really did seem to create discussions about the value of education. That’s what this day was really about.”

One of the most ethnically diverse high schools in the state, Roosevelt was until recently one of the state’s poorest performing. A three-year $7.7 million federal grant was awarded to Roosevelt in 2010 to help the school change its course. In a speech delivered at the commencement rally on Monday, Roosevelt Principal Charlene Williams called Roosevelt a school “on the rise.” Williams counted improved test scores and its dramatically increased graduation rate among Roosevelt’s recent achievements.

This year was Aukeem Ballard’s second time volunteering for ORCC’s MLK service day event. Ballard, a graduate student in Lewis and Clark College’s School of Education and Counseling, had no specific assignment on Monday. He filled in on projects where an extra hand was needed. Ballard said that Monday’s event was about helping Roosevelt students see college as a reality for themselves. On Tuesday, Ballard added, students at Roosevelt will hold “real and tangible evidence that Portland notices their progress and is cheering them on.”

This was ORCC’s third year organizing the MLK service day event. This year’s event was unique in that it focused the efforts of all volunteers on one site. In previous years, volunteers were bussed in from campuses all over the city to attend a morning rally. Following the rally, they broke into small groups, boarded buses and were sent to different project sites around the city. They were bussed back to a central location at the end of the day for another assembly and then returned by bus to their respective campuses.

Elizabeth Dunn, a junior studying Russian and graphic design at PSU, scrubbed desks and deep cleaned classrooms on Monday. Dunn participated in ORCC’s MLK Day event two years ago and said that she preferred seeing everyone working together at one site.

“Working all together on one school,” Dunn said, “I felt like a part of a bigger effort.” Dunn saw friends throughout the day and they shared experiences. “With everyone working on the same project you feel a greater sense of accomplishment,” Dunn said. “There’s a greater visible impact.”

Also, there was less travel involved, Dunn added, which allowed her to spend more of her time working.

“It is exciting,” Miller said, “that the biggest mobilization of college students in the country happens here in Oregon.” It is a great way, Miller added, to bring people with different backgrounds together in, what seem to be, very politically divided times. “It was a tremendous day and a great way to celebrate King’s message,” Miller said.

An unexpected side effect of the MLK Day event, Miller added, is that the different types of projects that students worked on showed volunteers that there are a variety of ways to be involved in their communities. Miller hopes that MLK Day participation is habit forming. Questionnaires that students filled out at the end of the day suggested to ORCC staff that Monday’s volunteers will continue to serve in their communities.

The Hammer and the press 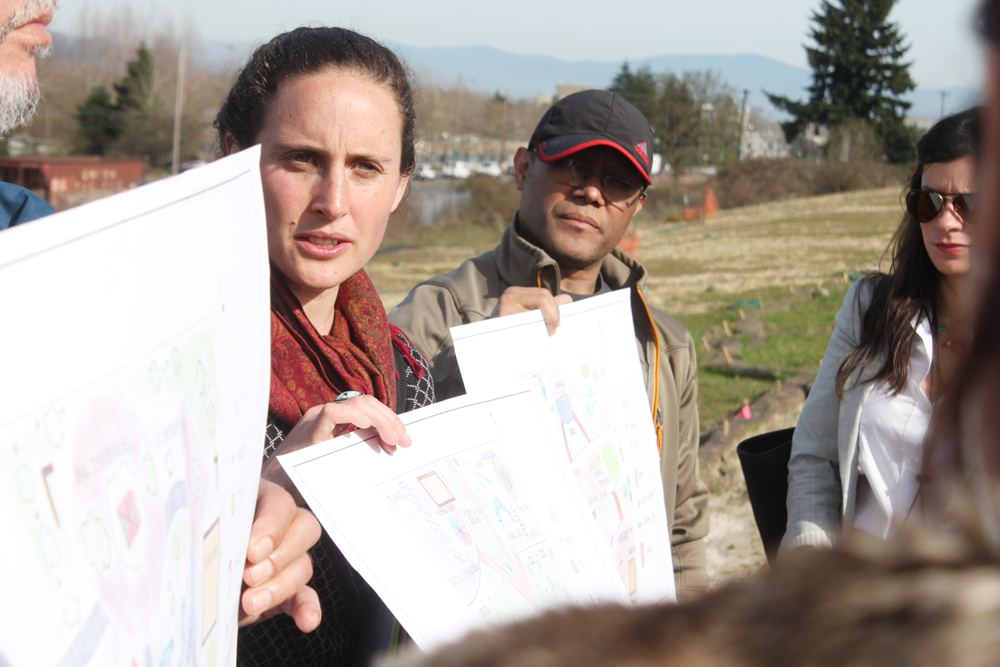