After just three years at the helm of the Portland State softball team, Amy Hayes has resigned to take the head coaching position at Bradley University in Peoria, Ill. Hayes’ departure comes on the tail of one of the most successful seasons for Portland State since it joined the Division I ranks in 1999.

After just three years at the helm of the Portland State softball team, Amy Hayes has resigned to take the head coaching position at Bradley University in Peoria, Ill.

Hayes’ departure comes on the tail of one of the most successful seasons for Portland State since it joined the Division I ranks in 1999.

In three seasons at Portland State, Hayes compiled a 92-81 record and won the school’s first Pacific Coast Softball Conference (PCSC) Championship in 2006, earning a trip to the NCAA Regionals.

“This was a very difficult decision and a very emotional decision,” Hayes said. “This is a program and a team that is headed up and we had all worked hard here to establish some winning tradition.”

Although Hayes’ abrupt departure leaves the team unsettled about their future coach, she said that the team is in a better position to contend for conference championships than ever before.

“I give my staff and our players a lot of credit because they have worked so hard. I feel like the cake is getting ready to be put in the oven,” Hayes said of the Vikings’ potential for next season.

Athletic director Torre Chisholm said that he was disappointed to lose Hayes but expressed confidence in the team headed into next season. “It was a tough decision for her,” Chisholm said. “Bradley gave her a really good offer.”

Hayes said that although the decision to leave the burgeoning program at Portland State was difficult, the opportunity to return to her roots in Illinois was too good to pass up.

“It is a good move for me because it puts me much closer to my family and gets me back in the Missouri Valley Conference,” Hayes said. “It will be nice to only be an hour-and-a-half away from them.”

Hayes attended and played softball at the University of Evansville, one of Bradley University’s rivals, and served as an assistant coach at Bradley during the 1997 season. She said the level of play at her new school would be a step up from the competition in the PCSC.

Three years ago Hayes replaced Teri Mariani, who went on to work in several positions within the athletic department before retiring in June after 32 years at Portland State.

“You are always sorry to see a good coach leave,” Mariani said. “I had hoped that she would stay around a bit longer, especially with the success that they are having.”

While the proximity to family may have served as the main motivation for Hayes to depart, other factors, including the uphill recruiting battle that Hayes fought at Portland State, played a role.

“When we first got here, some of the Portland kids that we were recruiting didn’t even realize that we had a softball team,” Hayes said. “We have established ourselves as one of the best teams in the Northwest now, especially after beating Washington, Oregon State and Oregon last season.”

“Winning championships is possible anywhere, but its tough to recruit kids to a field that they can’t see,” Hill said.

Hayes’ departure is the latest in a succession of head coaches resigning from Portland State to take positions at other schools. In the past two years football, women’s basketball, golf, women’s soccer and now softball have all undergone coaching changes.

Chisholm said that a national search is already underway to find a replacement and that he had already received numerous requests.

“We want the coach to be committed to success here at Portland State,” Chisholm said. 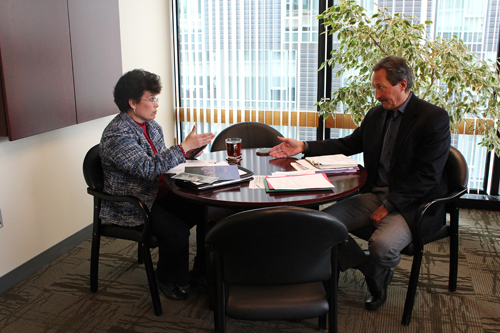