After years of dwelling in the shadows cast by the athletics programs in Eugene, Corvallis and even our cross-town rivals in North Portland, the resurgence of athletic success at Portland State has covered the South Park Blocks with rays of light, anticipation and excitement. Since the Vikings joined the Division I rankings nearly a decade ago, athletic success has seemingly been out of reach. Even overhyped squads that were expected to help establish Portland State as a flourishing program often failed to meet expectations.

After years of dwelling in the shadows cast by the athletics programs in Eugene, Corvallis and even our cross-town rivals in North Portland, the resurgence of athletic success at Portland State has covered the South Park Blocks with rays of light, anticipation and excitement.

Since the Vikings joined the Division I rankings nearly a decade ago, athletic success has seemingly been out of reach. Even overhyped squads that were expected to help establish Portland State as a flourishing program often failed to meet expectations.

But last year, riding the wave of momentum created by the hiring of head football coach Jerry Glanville, Portland State athletics began to smooth into the rock of consistency that Vikings fans have dreamed about for years.

With the rolling anticipation created by the three conference championships earned respectively by the volleyball, men’s basketball and golf teams last season, this year may present Vikings fans their best opportunity in recent memory to proudly root for their school.

Here is what you need to get you up to speed on the state of athletics at Portland State.

A new regime at the topAfter controlling the Big Sky Conference volleyball scene for 11 consecutive years, Sacramento State was finally conquered by the Vikings last season in an epic four-set match inside the Stott Center.

The victory clinched the regular-season conference title and earned the Vikings the right to host the Big Sky Conference Tournament this November.

Led by junior all-conference setter Dominique Fradella, senior defensive specialist Jalen Pendon and a plethora of talented outside hitters, the Vikings will look to continue their success from last season.

BackboneAfter earning their first Big Sky Conference championship and a trip to the NCAA Tournament last March, eventual national champion Kansas trounced the Vikings in the first round.

But the defeat to the Jayhawks was not nearly as significant as losing the Vikings head coach, the young and talented Ken Bone, would have been.

Following the team’s success Bone was heavily courted by Oregon State. Lucky for Vikings fans, his services were retained, and count on him to lead the men’s basketball squad to another stellar season in 2008-09.

Behind the playmaking ability of Big Sky Conference Player of the Year, senior point guard Jeremiah Dominguez, the Vikings should be favored in the conference again. Look for sophomore forward Phil Nelson, a transfer from the University of Washington, to use his athleticism and talent to impress this season.

A Glanville governmentFollowing a disappointing first season in which his squad stumbled to a 3-8 record and seventh place finish in the Big Sky, Glanville flushed his roster, bringing in some 45 new faces for practice in August.

Glanville has promised that success is forthcoming, although he will not comment on how imminent that success is. And although coaches and players seem to be buying into the Glanville song and dance, do not expect immediate results. In reality, the team will be lucky to linger around .500 this season.

But just because they are not producing in terms of wins and losses, does not mean that the Vikings do not generate excitement.

Last season, offensive coordinator Darrell “Mouse” Davis’ run-and-shoot offense led the nation in passing yards per game and averaged over 30 points per game. The team also drew well at PGE Park, averaging over 10,000 fans per game, the most since 1999.

Overlooked accomplishmentsWho has been the most successful sports team at Portland State since 2000? Surprising to some, the answer is women’s golf.

In 2008 the squad captured their third Big Sky Conference Championship in eight years behind the play of sophomore medalist Hannah Bews, and earned a trip to the National Championship opening round in Sacramento, Calif.

Although Bews has since transferred, look for continued success this year, as the Vikings return talented players in stalwart senior Kayla Morinaga and sophomore Alexia Brown.

Tremendous twosomeBehind the duo of junior All-American point guard Claire Faucher and all-conference senior forward Kelsey Kahle, women’s basketball experienced their finest season in recent memory.Led by first year head coach Sherri Murrell, the Vikings return nearly their entire roster and will be one of the favorites in the conference this year.

Coaches flightLost amid much of the recent success of the athletic department is the departure of six of the 11 Portland State head coaches over the last two years.

The football, women’s basketball, golf and soccer programs are all at some stage of transitioning to a new coaches’ system while the tennis and softball programs are currently without head coaches heading into the academic year.

Clearly it is difficult for the athletic department to compete with programs from larger universities that may be able to offer better opportunities than Portland State.

However, some of the coaches have resigned to take similar or even apparent demotions. Such is the case with former soccer coach Tim Bennett, who resigned to take an assistant coaching position at Iowa State. Whatever the reason, the athletic department needs to do their part in the retention of coaches if they want long-term success. 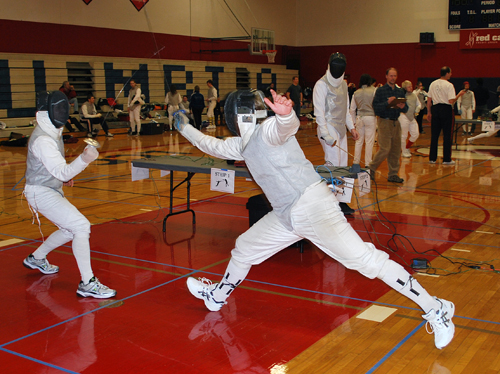 The incredible world of fencing