Watching the sun set against the Giza pyramids, tasting authentic pastries in France or riding a bullet train in Japan—any of this could be part of your senior capstone curriculum. 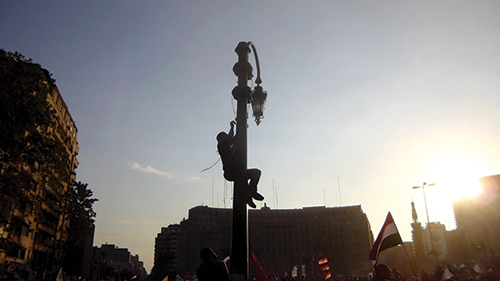 A protester climbs a light pole in Tahrir square in downtown Cairo. Seth Thomas was able to snap this photo and snare it on his blog for his capstone course. Photo courtesy of Seth Thomas.

Watching the sun set against the Giza pyramids, tasting authentic pastries in France or riding a bullet train in Japan—any of this could be part of your senior capstone curriculum.

Students participating in the program have reported live from all over the world: East Asia, Europe, Latin America, the Middle East, Africa and Oceania.

Other than studying abroad, requirements for entering this program include being able to write with a conversational voice and being blog savvy, according to Reporting Live Program Director Kate Kangas. Since no final exam is taken, students instead meet with their class face-to-face at the end of the term, a “finale celebration.”

“I’ve offered it now for two fall terms in a row, with plans to offer it again next fall,” Kangas said. “We’re hoping to expand it to spring term as well.”

Blogging from the biggest city in the Arabic world—Cairo, Egypt—PSU junior Seth Thomas shows Leslie Burgoine’s sixth-grade social studies class at Lane Middle School in Portland what life is like in the desert metropolis. 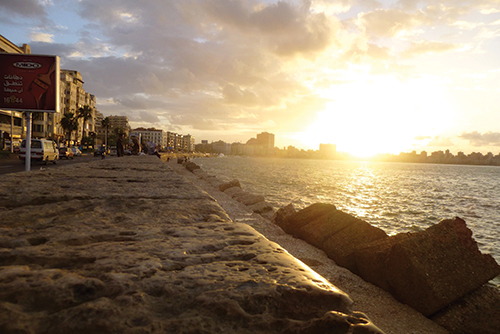 Trains in Egypt give women the option to ride with men or on women-only cars. Thomas discussed this cultural difference with his class.

“I talked a little bit about sexual harassment, and it was difficult to figure out how to talk about that,” Thomas said.

If you think the program is cakewalk, think again, Thomas warned. It’s not focused solely on the blogosphere.

“It’s a lot more work than it appears at first, because it’s not just blogging once a week,” Thomas said. “You also have readings and you have to respond to at least two students’ blogs each week.”

Study-abroad students lacking motivation to document their travels could find an extra push by taking the capstone course.

“It definitely made me have a bit more of a structure, as far as making those videos. It was something I wanted to do anyway, but probably something I wouldn’t have done without a teacher and grade to respond to,” Thomas said.

Amy McBride teaches social studies and language arts to sixth- and seventh-graders at Access Academy, a public school program for talented and gifted students in Portland.
She teamed up with Josh Hunt, last year’s Vanguard editor-in-chief, who reports live from Tokyo.

“One of my students…felt like she had a lot of stereotypes about Japanese people based on manga, anime and media,” McBride said. “She felt she learned a lot about life there beyond the
stereotype.”

McBride’s students check Hunt’s blog every week, often replying to posts. Students were excited about the project, especially its use of technology, so participation levels were high.

“It’s definitely a really great way to engage students in the class,” McBride said. “It gets them thinking beyond middle school, too.”

Seeing diversity from someone else’s perspective was one of the most positive parts of the program, according to
McBride.

“I think that it really gave them the awareness of what it is like to be living in another culture as a foreigner,” she said.

One of the first students to sign up for “Reporting Live” was John Esh. After considering a career teaching English in France, he used the capstone to help him decide.

“It was a lot of fun for me to show these students France through my eyes,” Esh said. “Definitely do it!”

Rowing in sync with the PSU crew