Like a Magic 8 Ball with a single shred of advice floating around its inky interior, the National Rifle Association—one week after a gunman took the lives of 26 people in an elementary school in Connecticut—insisted that firearms are still the best medicine against gun violence. 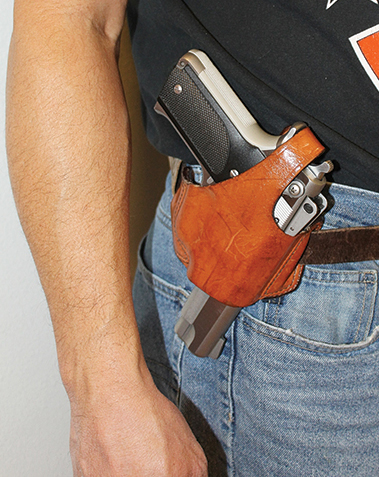 Like a Magic 8 Ball with a single shred of advice floating around its inky interior, the National Rifle Association—one week after a gunman took the lives of 26 people in an elementary school in Connecticut—insisted that firearms are still the best medicine against gun violence.

Before the news from Sandy Hook had time to sink in, I sensed the wagons circling. Zealous Second Amendment champions assumed familiar defensive stances. Gun shops offered teacher discounts and firearm sales surged. The outsized backlash against reason that follows mass shootings in the U.S. culminated in the NRA’s press conference Friday, Dec. 21.

After wagging his finger at the news media, lawmakers and the producers of violent entertainment, LaPierre called on Congress to stop at nothing “to put armed police officers in every school and to do it now.

Senate Democrat Dianne Feinstein wasted no time responding to LaPierre’s atavistic comments by pointing out that two armed law enforcement officials at Columbine High School couldn’t prevent a killing spree that ended 15 lives. The Columbine massacre 13 years ago proved that armed “good guys” don’t always have what it takes to stop deranged gunmen, and don’t deter them, either.

Days after the NRA press conference, LaPierre held steady, refusing to concede the point that there are such things as sensible gun restrictions. Limiting access to assault rifles and banning high-capacity magazines that allow shooters to fire more rounds before having to reload, LaPierre told Meet the Press’ David Gregory, will do nothing to reduce the death toll the next time a person with a gun loses his or her mind and opens fire on innocent people.

Looking at it from a certain angle, in a way, LaPierre is right: Guns aren’t evil. On their own, they can’t kill people. They deserve credit for the assist, though.

Given the choice between running from an assailant armed with a gun or running from an unarmed attacker, LaPierre and those like him would choose the latter. It would be equally easy for him to choose between a gunman with 30 live rounds in his gun and one with only 10.

Aside from whether Operation Kindergarten Cop would protect America’s schoolchildren from the next Sandy Hook tragedy, the plan, at a time of limited budgets and strained resources, would be nigh impossible to implement.

Though LaPierre and other NRA spokesmen retreated from the stage without revealing the cost of their plan or where the money to pay for it would come from, Bloomberg.com did the math and estimated that hiring, equipping and paying 99,000 armed security guards—one for every elementary school in America—would set taxpayers back almost $8 billion.

LaPierre acknowledged in his statement that the federal government can’t afford his plan, so he might as well have suggested that we provide every school-aged child in the country with Kevlar overalls and miniature PASGT helmets.

The NRA’s proposal, while elegant in its simplicity, is so incomplete and full of holes that not even LaPierre himself is addled enough to believe in it. Furthermore, LaPierre’s plan to station an armed policeman in every school ignores the fact that fewer than one-quarter of the more than 150 people who were killed or injured in mass shootings in 2012 were shot on school campuses.

Either the NRA, an organization that spends roughly $20 million annually “defending the U.S. Constitution” has lapsed into senility, or its spokesmen are lying through their teeth.

If they are lying, then this ham-handed press conference represents an intentional last-ditch, greed-fueled effort to cloud the national discussion about gun violence until the anguish of the Sandy Hook shooting fades and outrage subsides.