Portland State’s crew team is dedicated to their sport, enough so that the scrappy group of rowers isn’t above making sandwiches out of leftover spaghetti, which they did at a competition in Sacramento last year when their funds ran out.

Portland State’s crew team is dedicated to their sport, enough so that the scrappy group of rowers isn’t above making sandwiches out of leftover spaghetti, which they did at a competition in Sacramento last year when their funds ran out.

“We’ve been a really underdog team so far,” said Nastia Andrukhiv, the team’s fundraising coordinator. “Last year we went to California for a competition. We were there for three days. We had no food. We had no money. We kind of decided that we need to ask people to donate and try to get some money so we aren’t like that.”

To counteract the costly nature of the sport and hopefully avoid future tough times on the road, the team is holding an “erg-a-thon” this Sunday at the Northwest 14th Avenue and Johnston Street REI, from 10 a.m. to 7 p.m. The fundraiser will feature free Urban Grind coffee, food from Trader Joe’s and free two-week passes to 24-Hour Fitness for those who donate.

The team uses a boathouse located underneath the Hawthorne Bridge as its home base. When weather makes it unsafe for the team to row on the river, they use ergometers to train indoors.

Members of the team will be on hand to demonstrate proper use of an ergometer, which is found in most gyms and mimics the movement of rowing a pair of oars.

The team hopes to raise approximately $5,000, said head coordinator Strother Hill, 22. Much of that money will come from family and friends, though the team is also using the event to raise their profile in the community.

Last year, the team held an erg-a-thon fundraiser in Smith Center, and hardly anyone took notice, Andrukhiv said. This year, the hope is that a more visible location will help draw attention to the group.

“We’re trying to get a larger team,” Hill said. “There actually is a crew at Portland State. A lot of people, we’ve determined, don’t have any idea what crew is, whether it’s dragon boats or canoes or a work detail.”

Crew, or the sport of competitive rowing, ranks among the oldest intercollegiate sports in the United States. The first race was between Ivy League schools Yale and Harvard in the early 1800s.

The team used to apply directly for Student Fee Committee funding but now falls under Campus Recreation. Still, funds are limited, especially when a new boat can cost up to $30,000.

“It’s not a cheap sport to set up,” said James Rawson, the team’s head coach and a former coach at the University of Kansas. “There’s some travel involved. Even at the D-1 level, there’s always fundraising.”

The fundraising efforts come at a time Hill calls a “rebirth year” for the team. Attendance at the team’s 5:30 a.m. practices is continuing to rise after rarely breaking 20 people the past few years.

For Hill, it was watching boats flit across the Willamette River while he was in high school that caused him to seek out PSU’s crew team (and those tough early morning practices) when he arrived in the South Park Blocks.

“I’d walk up and down the bridges in Portland and see the boats and thought it was great. As soon as I got to Portland State I found the team and joined them,” he said.

Andrukhiv, 25, joined because she and a friend wanted to find a fun way to keep in shape.

“The only two clubs that had websites were crew and badminton,” she said. “We picked crew even though we were a little reserved about the whole 5:30 in the morning thing. We both fell in love with it.”

Molly McGuire, 19, was one of a few high school rowers in the United States. Fewer than 2,500 student athletes row at the high school level, with most coming to the sport in college, Rawson said.

“I rowed in high school at Ashland High School,” said McGuire, a political science major. “I was really interested in continuing to row because I’m really attached to the sport. I joined the team this fall, and it was really exciting because there was a really good energy with the team, especially this year, I guess.”

It’s that energy that Rawson points to when describing how far the team has come.

“This group has gone from having five or six people at every practice to twenty,” Rawson said. “They are close knit and the team has positive momentum. The team is getting bigger and stronger. They keep asking ‘how can we get better?'” 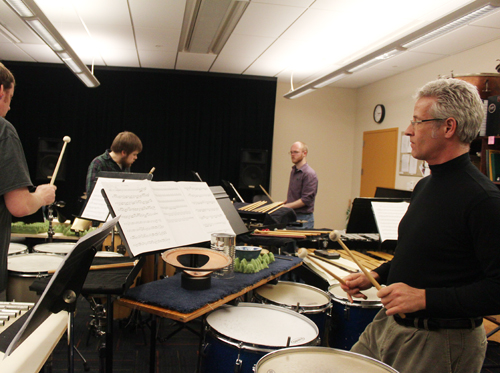