As issues of student debt and rising tuition resonate with students across the country, students at Portland State are making an effort to change the current educational system.

As issues of student debt and rising tuition resonate with students across the country, students at Portland State are making an effort to change the current educational system. 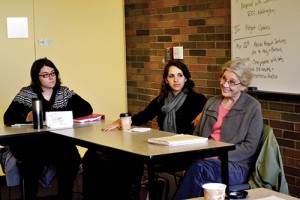 The Senior Capstone class titled “Student Debt, Economics, Policy and Advocacy” has developed a plan to ease the burden of student debt.

The class has named the plan Pay It Forward, and will be meeting with state legislators to discuss their ideas soon.

“The capstone project revolves around promoting legislation that restores consumer protections for those with federal or private student debt,” said Mark Miller, a senior economics major who is part of the capstone project.

Pay It Forward is essentially a loan program reworked. The plan would allow college students to attend a public university free of charge.

After graduating, students would then sign a contract to allow a small percentage of their yearly income to go into a public higher education fund, which would finance students in school working toward degrees.

The class estimates that students would pay 3 percent of their income for a four-year degree, while people who go through two-year programs would pay 1.5 percent.

“It’s like Social Security except it’s reversed,” King said. “You get the benefits first, and you pay later.”

Students in the class have been pressing the issue of student debt by tabling and handing out flyers. They have also been advocating for legislation such as the Student Loan Forgiveness Act and the Private Student Loan Bankruptcy Fairness Act.

Recently, the class organized a legislative panel to discuss Pay It Forward that is slated for Dec. 3.

“We are urging our representatives to put an end to the ‘debt-for-diploma’ structure and fund higher education similarly to Social Security, with a specific fund set aside and funded by a tax,” Miller said.

The class is being taught at a time when budgets are being reorganized and slimmed as individual states and the nation as a whole struggle with deficits and revenue shortages.

Mary King, one of the professors who teaches the capstone course, said much of Oregon’s financial issues stem from decreased property and corporate taxes.

“So their share of taxes has fallen and we’ve really squeezed down the corporate income tax, so we’re really only collecting taxes from households,” she added.

Barbara Dudley, the other professor involved in the project, made some remarks about student debt at Lewis and Clark College.

King did acknowledge the difficulty of bringing the program to life, since no such higher education fund exists at the moment.

“Clearly the trick is getting the thing started,” she said.

Pay It Forward proposes bonds as the solution to paying for the first round of students in the system.

As with all capstones, the class is partnering with several community organizations to work on the project, including Jubilee Oregon and the Working Families Organization.

Jubilee Oregon’s platform is dealing with working-class debt both locally and worldwide, while Working Families focus on middle class issues such as affordable health care and education.

Representatives from both groups advise the class on tactics for implementing their proposal, such as how to interact with state legislators and the means of actually affecting public policy.

“The idea came from Mary King and the class, and we thought we could participate and give them some insight on student debt,” said Robert Brown, chairperson at Jubilee Oregon.

The Dec. 3 panel will start at 10 a.m. in the Urban Center’s second floor gallery.