No major crimes reported over the summer

While crime on campus was minimal over the summer, the Campus Public Safety Office is taking extra precautions to increase campus security for the upcoming year.

No major crimes reported over the summer

While crime on campus was minimal over the summer, the Campus Public Safety Office is taking extra precautions to increase campus security for the upcoming year. 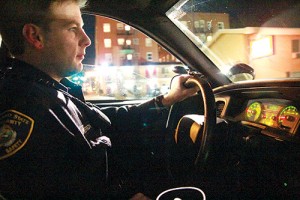 Having fewer students on campus during the summer made it easier to identify external threats, according to CPSO Chief Phillip Zerzan. He said the majority of arrests made were for individuals not affiliated with Portland State.

As the school year begins, however, CPSO’s overall goal is to make everyone on campus feel safer and be safer, with a visible presence and preventative measures.

In addition to patrolling on foot and by car, CPSO officers have increased the use of bicycles.

“[Biking] is absolutely the best way to get around,” said Sgt. Joe Schilling, a veteran of the Portland Police Bureau and one of the first officers to conduct bicycle patrols in the late 1980s. The bicycles help officers blend into their surroundings and give them the advantage of seeing over people in large crowds.

Around campus, Transportation and Parking Services has posted CPSO’s number and other safety advice on placards in the stairwells of all major parking garages. Students are urged to call for an officer to escort them to their cars if they are parked on PSU property and feel unsafe.

Parking Structure 3 had previously seen an increase in break-ins because of low visibility in some areas, but after CPSO replaced burned out light bulbs, that increase came to a halt, Zerzan said.

Regardless of PSU’s growth in recent years, CPSO’s safety model reflects a smaller campus community. Zerzan would like to see a fully functional police department on campus, one that follows nationwide best practices.

The number of students living on campus is up because of the new University Pointe housing complex, but statutory authority limits CPSO to property owned by PSU, which means they will not be responsible for patrolling its grounds.

Despite the limitation, CPSO hopes to treat the building like part of the campus community in a more direct manner, Zerzan explained.